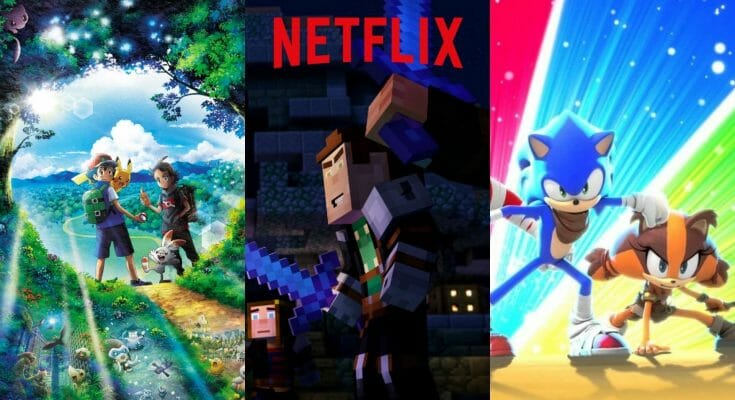 The last few years have proven that streaming services are the future of television. Indeed, more and more content is being developed specifically for these services. Several video game companies have partnered with Netflix in order to develop content that is based on well-known franchises.

Here we present 5 series or movies available on Netflix that are for children, or made to be listened to as a family.

Each title that is presented will also be accompanied by its maturity ranking according to Netflix.

Benefits of taking an interest in the interests of your child

There are real benefits to being interested in what your child is listening to on Netflix. This allows children to…

The Pokémon game series is one of the most well-known franchises in the world. Pokémon movies and series always feature Sacha accompanied by his Pokémon Pikachu, who go on an adventure to discover new Pokémon. On the way, they encounter adversaries who are trying to carry out their evil plans. They also team up with friends who help him save the world from Pokémon.

Although Pokémon use attacks of ice, fire, electricity, etc., there is no blood. However, we can see that Pokémon are injured: they have bruises or they have difficulty getting up from a fight, for example.

Each film and series has a self-supporting ability: there is no real order to follow in the series and each film is independent.

Pokémon, the movie I Choose You

This movie is a reboot of the Pokémon movie series. It takes some elements of the very first series that played in the 1990s, while giving it a breath of fresh air and modernity. The film tells how Sacha became a Pokémon trainer and how he met Pikachu. Sacha and Pikachu team up with new friends to solve the mystery behind the Legendary Pokémon Ho-Oh. The animation of this film is breathtaking and the story is captivating. It will certainly give the taste to discover the world of Pokémon.

The film will certainly be enjoyed by fans of the series who listened to the original shows when they were very young. So it’s a great opportunity to listen to a movie with your child.

The future of the Minecraft universe is threatened by a sinister creature. Jesse and his allies must follow in the footsteps of the members of the Order of the Stone to save their world. The series is composed of 5 episodes that offer a certain interactivity with the viewers: at certain points in the story, you will have to use your remote control or mouse to select choices that will affect the rest of the show. Children who listen to this series will find several elements that make the original game so pleasant to play: the resumption of cube graphics that are so well known, the presence of creatures such as dragons or Endermans, or weapons that can be used.

This series is aimed at kids and teens who like to play the Minecraft game (you can read our review here).

In this TV series, our favorite blue hedgehog, Sonic, tries to stammer Dr. Eggman’s evil plans. Sonic and his friends, Knuckles, Tails, Amy and Sticks fight Dr. Eggman’s evil robots in a wacky and comical adventure. This series will appeal to fans of the series as well as to those who discover for the first time the universe of Sonic.

The show is a sequel to the games Sonic Boom: Rise of Lyric and Sonic Boom: Shattered Crystal. It is not necessary to have played the games in order to enjoy the show.

This program is aimed at both children and adults. It’s a great opportunity to spend a lot of time laughing with your family.

This series based on the game of the same name uses the same animations inspired by Disney cartoons of the 1930s. Cuphead and Mugman roam the Islands of Inkwell in order to break the boredom. The main characters discover a carnival led by the Devil, who, for obscure reasons, wants to procure the souls of the inhabitants of Inkwell. To do this, he uses the attractions of the carnival, which suck the souls of the players. Cuphead and Mugman, by freeing the souls of the inhabitants, ward off the wrath of the Devil, who will do everything to find what belongs to him.

Cuphead and Mugman will live adventures all as comic as each other. They will meet characters who were in the original game as well as new ones. It is a series that parents will be able to listen to with their children. Absurd humor will make people of all ages laugh.

Available in French and English.

Which series will you listen to first?

Personally, I recommend Pokémon, the movie I Choose You! Being a fan of Pokémon for a long time, I enjoyed revisiting the origin of Sacha and Pikachu. And you?