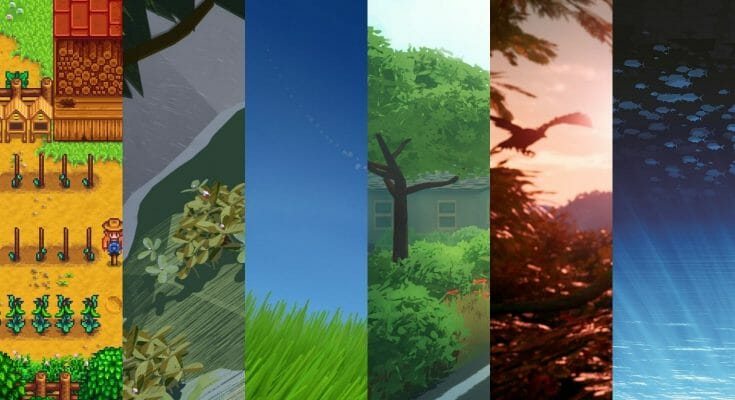 Children learn to understand how their world works, step by step. Their ecological awareness develops through the conversations they have with their peers, but especially through adults. However, teaching this value, even for an adult, is an issue in itself. Indeed, it is good to explain current environmental issues to our children, but it is just as relevant that they can also learn them in a much more immersive way. That’s why we decided to make a list of 6 games that help awaken your child’s ecological awareness.

Away: The Survival Series

This action/adventure game puts you in the shoes of a flying phalanger (a marsupial) in order to live in your own wildlife documentary. As you progress through the story, you’ll play as other small animals like a frog or lizard. You will sail through a grandiose and life-filled world. You will face dangers like predators and threatening environments. A narrator accompanies you throughout your quest. You will have to save your family, but also learn more about the Shift, a natural disaster that seems to have had a considerable impact on the environment of this phalanger. This game is developed by the Montreal studio Breaking Walls.

This game requires little reading. The controls are relatively simple. The developers recommend playing with a controller if the game is played on PC. Although the title of the game includes the word “Series”, this game, as of February 2022, is not part of a particular video game series.

Stardew Valley is a role-playing game in which you inherit your grandfather’s farm, which is located in the Stardew Valley. It is in this valley that you will reconnect with nature and your community. This game offers a freedom that is welcome. Indeed, you can decide to raise animals, grow crops, create friendships, explore the mine to defeat the monsters there, and many other activities! This game highlights the importance of connecting with nature through its engaging gameplay and sumptuous visuals. This game has a very long lifespan, since it has no end in itself.

The game addresses some social issues such as environmental conservation, mental health and homelessness. The whole thing is presented in a form that could be understood by young teenagers of 12 or 13 years old. Children under this age will be able to enjoy the game, however, the presence of a parent is appropriate for younger children, as they may have less understanding of these issues. In addition, the game requires a good reading ability considering the many texts that must be read in order to fully understand the mechanics of the game.

This platform game, although very short, offers a fairly memorable experience when it comes to the effects of poor waste and oil management on the environment. This free game is a student project of the University of South Carolina. The game puts you in the shoes of young Noa, who wants to find a better world. Decisions made in the game affect the end of the game. Will you be able to make the right decision in order to save the world?

This free game is 20 to 60 minutes long. You have to play this game a few times in order to discover all the endings that the game offers. We strongly recommend that parents play this game with their children, since the themes, grief and death, could be difficult for them to understand. We do not recommend children to play this game alone. We decided to include this game in this list because we believe that the message is conveyed in a direct and frank way.

Available for free on PC. Unfortunately, the game is only playable in English. However, there is very little text to read. Playable solo, but as we name it before, we recommend playing this game with your child.

Flower puts you in the shoes of… well, how to say, a draft? Indeed, in this adventure game, you play as a breeze that picks petals as it passes. This experience is very peaceful and visually pleasing to the eyes. You will have to cross levels all as beautiful as each other. During your game, you will notice that some of the landscapes seem to be invaded by metal constructions that seem to break the environment of the game. It is your mission to break these constructions so that you can liberate nature. Flower offers a moment of relaxation that makes you think.

The environmental issues explained by this game are close to metaphor. Some young children might not understand the connection between this game and ecological awareness. This does not mean that this game should be avoided. Like Plasticity, this game offers an opportunity to open a dialogue on current environmental issues. On iOS and Playstation 4, the game is playable with motion controls.

In this role-playing game, you play as Anika Stonefly, who aims to recover a family treasure of great importance. To do this, you will pilot a mech (mechanical armor) to explore your challenging environment. You will have to defeat insects in order to improve your mech. You will make memorable encounters. This game puts you in a completely different perspective: that of a human the size of an insect. The theme of ecological awareness is evoked through the landscapes that are beautiful.

This game is developed by Flight School Studio, which has a studio in Montreal. This game requires a good level of reading and a certain level of autonomy, given the complexity of the mech improvement system.

This game is available on all consoles and on PC. Playable solo only.

Like Stonefly who plunges you into a miniature world, Abzû literally plunges you into the sea. This simulation game puts you in the shoes of a diver who at first, does not seem to have a specific goal. On the other hand, you will find drones that will help you find your way. You will find portals that will lead you to other environments, always underwater. The story of the game is revealed little by little, without any words, no text. The theme of ecological awareness lies in the visual and in the soundtrack.

Just like Flower, this game is closer to metaphor. A young child may have difficulty understanding how this game conveys an ecological message. This game has very little text to read, and has very simple controls.

This game is available on all consoles and on PC. Playable solo only.

The environmental issues we are currently experiencing are complex for many to understand, but they are particularly so for our children, who are still learning how their world works. These games will require, for the most part, a discussion between the parent and the child regarding their images and themes. Indeed, it is by opening the dialogue and allowing the child to ask his questions that he will be able to further awaken his ecological awareness.