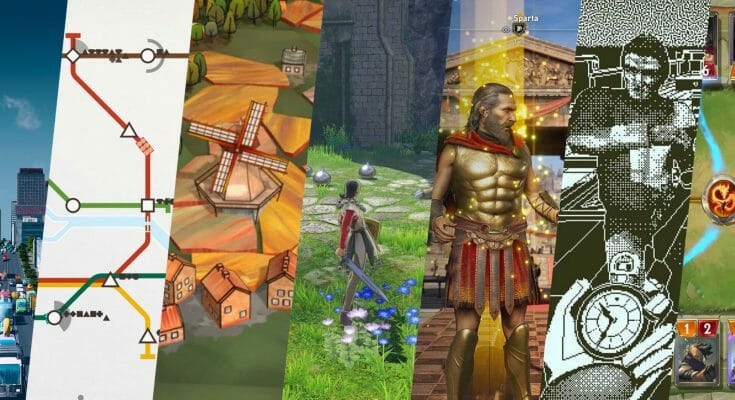 Want to play a game, but want to avoid the stress of a Game of Call of Duty or League of Legends? Make yourself a hot tea and make yourself comfortable for this list of seven relaxing and non-reflex games.

The spiritual successor to city creators like Sim City, Cities: Skylines has been one of the best city builders for years. A very complete game, which allows you to organize beautiful cities with public transport, car traffic management, create beautiful parks and peacefully slowly but surely grow your city.

The game is relatively easy to learn, but is long to master, and is a very complete simulation that is very satisfying to learn to use. Cities: Skylines,is available on computer, Playstation and Xbox.

Mini Metro and Mini Motorways are two games from independent developer Dinosaur Polo Club in which you have to bring passengers to their destination, drawing lines (either subway or drawing roads). The number of passengers is growing rapidly and their needs are rapidly becoming more and more complex. Test your management ability with these approachable and addictive little games.

The game par excellence to create beautiful peaceful rural landscapes, Dorfromantik is a puzzle game where you have to combine hexagonal tiles composed of different environments to earn points. Create rivers, woodlands, villages, train lines and complete random missions to keep winning tiles and avoid the end of the game for as long as possible.

With its adorable aesthetics and relaxing music, Dorfromantik is an ideal way to decompress without disabling your neurons.

Featuring a story of good length and a variety of interesting characters in a complex and lively fantasy world, Dragon Quest XI is a good way to enjoy the many benefits of role-playing games without the pressure of using your reflexes.

An interesting, educational and relaxing activity, visiting these places as a “tourist”, Ubisoft’s Discovery Tour games are experiences not to be missed.

Return of the Obra Dinn

Return of the Obra Dinn is a fascinating puzzle game, with a very important audio component. You play an employee of the British East India Company who tries to dissect what happened on a merchant ship that was found abandoned. With the Memento Mortemin hand, a magical object you “listen” to the events that took place on the ship in order to identify the cause of death of the 60 missing passengers. The game takes the form of a huge logical puzzle of a few hours.

With its unique black and white graphics and one-of-a-kind mechanics, Return of the Obra Dinn is worth a visit. The game is available on all platforms.

The digital card game from Riot Games, the developer of League of Legends and Valorant, features several interesting changes to the formula that Hearthstone popularized. You collect cards in order to build decks of cards. The objective of the game is to lower your opponent’s life to 0. Notably, players can keep a reserve of mana at the end of the round for the next round and alternate at each turn which of the two can attack. In Legends of Runeterra,players also use “Legends”, cards more powerful than others that can level up during the game.

Legends of Runeterra is an excellent game that requires strategy. It is available on PC and mobile devices.

Outside of the “AAA industry”, there are a lot of video games for all players. Games that require few reflexes allow those who are less comfortable to be able to enjoy their games. We have only scratched the surface of games that do not require reflexes. What are your favorite games of this genre? Leave us your opinion in the comments!