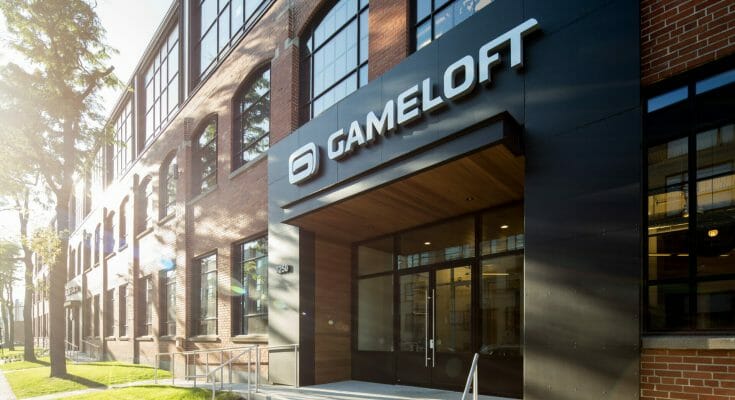 We are spoiled as gamers in our time. Whatever our platform of choice, we have access to thousands of video games. In Quebec, there are 231 studios currently dedicated to our favorite industry. Attracting thousands of passionate workers from around the world, each studio tries to stand out from the competition to attract the best talent. It was in this context that Gameloft Montreal invited us to visit its studio and explained how it was getting its pin… of the game. We were able to ask many questions including Matthieu Dupont, the director of the studio, and we thank him for his patience and kindness.

Installed for twenty years in Montreal and for about 5 years in the premises near the Parc station, the studio offers its 450 employees large workspaces where everyone can perform his tasks in peace and move around without disturbing colleagues.

Indeed, Gameloft is an industry veteran, first founded by the Guillemot brothers in 1999 in France and then bought by Vivendi in 2016. It is made up of 19 studios located around the world. 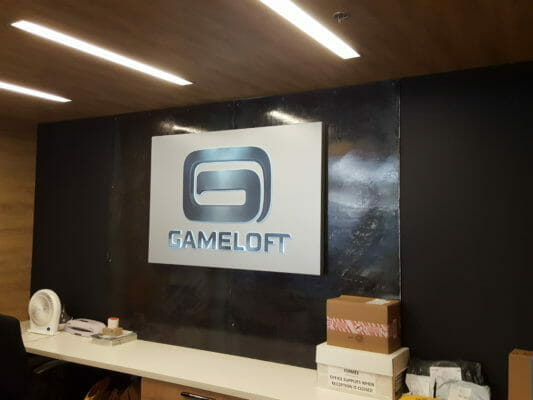 However, each studio is responsible for its productions. Thus, a game is fully developed in Montreal, for example. No additional modes developed elsewhere. This has advantages such as the fact that the whole team is on site, if you need information, just ask your colleague next door instead of going through instant messaging and hope that the colleague in Europe or Asia sees the message with jet lag. The game will also have the same level of quality overall and the conceptual and artistic direction remains true to the vision of the team.

Gameloft mainly makes games for mobile phones. While Modern Combat Blackout appeared on Nintendo Switch and Asphalt 9 will appear later this year, the company’s fans are mostly on iOS and Android devices. Indeed, fans have grown up with the company and have followed their productions over the years.

So it’s a great experience that Gameloft has for these platforms and makes it one of the world leaders on mobile.

Their most famous franchises are Gangstar, Dungeon Hunter, Modern Combat and Asphalt in particular.

So yes, I see you coming, dear hardcore-gamersfriends: “Yes but it’s free-to-play, so there are all the mechanics of frustration and retention”.

Matthieu Dupont confirms that Gameloft is aware of games that abuse this kind of mechanics on the various virtual stores and the studio puts a lot of effort to produce quality titles made in about one or two years.

It’s a constant balancing act between producing interesting content for players who can entertain them for many hours and being able to pay developers. The game gives access to a lot of content for free, then it makes the player happy to buy the costume or character that makes us want next, as in our MOBA, FPS or combat games … consoles or computers.

They also try to support the phone controllers (Bluetooth, USB) when the game is adapted, but, according to their statistics, very few people play with controller on mobile. 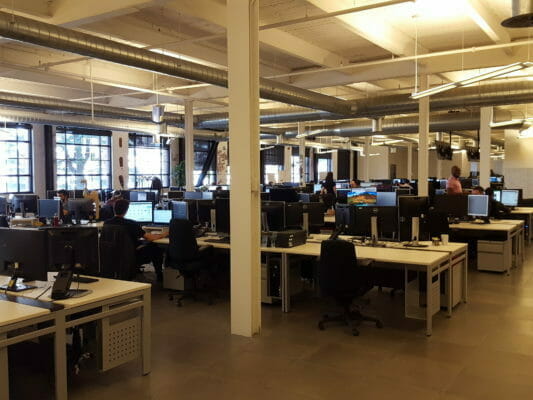 Gameloft as a service

The vast majority of Gameloft productions are maintained for years after the initial launch. Many Games as a service therefore, which get additional content as you go: quests, characters, game modes, events. Productions require about 35 full-time staff before launch, and then part of the team stays on the project to continue producing content.

The fact that teams are working primarily on Game as a service instead of focusing on a fateful launch date helps to minimize crunchperiods.

As a reminder, the crunch, these are periods when employees work in addition to the 40 hours per week of their employment contract, in order to finish a feature, or solve the bugs of a game.

In recent months, numerous articles in the press have appeared denouncing abuses in this area in the video game industry.

At Gameloft, the crunch can happen, but this one is compensated and is absolutely not the norm, nor still mandatory.

Management wants employees to have the right schedules and a good balance between family and work. Indeed, there is no point in tiring employees that are needed over the years to come, it is not a good management strategy, especially since games require content after launch. It is therefore possible to make a soft launch,and then add content later with free-to-play mobile games.

Second, the teams are masters of their time and have a greater impact on the sound, visual, as well as the playability of the final product. There is no top-down vision at Gameloft, each team makes its own choices on the title they produce and the director only gives optional feedback. There is more freedom and fewer orders from managers and shareholders. In addition, the teams are small, so this allows everyone to have an impact on the final game. Communication between the different teams is also encouraged and, several times during the week, they meet among themselves to discuss their games. It is therefore possible, as an employee at Gameloft, to help with the design of several games and thus participate in an iterative production as a team.

As has been said, hundreds of games are released every day on virtual stores. To stand out, Gameloft has a few tools:

While many Gameloft games are available on the Stores,6 new ones are currently in production, in addition to those already released and maintained.

Life in the studio

A rarity in the industry, Gameloft Montreal has the distinction of having its own sound design department and its localization department. This allows you to be more responsive and create elaborate sound banks for all Gameloft studios around the world.

The sound design department has all the audio equipment needed to capture the sound of course, but also a good number of accessories to produce sounds of punches, walking in foliage, sword blows… In short, everything it takes to give an impact to the actions in the game and feedback to the player.

As a reminder, localization consists of a translation adapted to the culture of the language. For example, translating a Japanese game with references to a Japanese TV show, directly in French, does not make sense. Instead, the translator will try to find an equivalent in French-speaking culture.

24 sound designers and 50 translators are currently employed in the Montreal studio.

70 people are dedicated to the online infrastructure of games; developers who launch their online games are not helpless on this subject, a well-established and dedicated team supports these tasks. Allocation of servers according to the attendance of the games, check the proper functioning, everything goes.

The schedules are quite flexible, you just have to synchronize with your team for meeting times, for example. Gameloft employs men, women, non-gendered people, diverse and external backgrounds as well as local people, seniors as well as juniors. This inclusiveness in the studio allows for broader ideas and more diverse expertise. “After all, you have to start as a junior, to become a senior,” says Matthieu Dupont. About one-third of the employees hired are references to other employees.

In addition to hundreds of workstations, employees have at their disposal a kitchen, rest rooms, games rooms with pool, table football and the 3 consoles of the moment. Naturally, an Ultimate Smash Bros is present, it seems that this is a requirement in gaming companies. A terrace is also available for sunny days. Employees can enjoy their breaks away from their desks.

If you seem to like such a studio to work on it, don’t hesitate to take a look at their job offers. They are delighted to welcome new talent.

If you are curious about their productions, I strongly encourage you to test them. Simply type “Gameloft” on the Apple Store or Google Play Store to find them. Maybe you’ll find your new favorite game.

Thanks again to Gameloft for opening its doors to us.