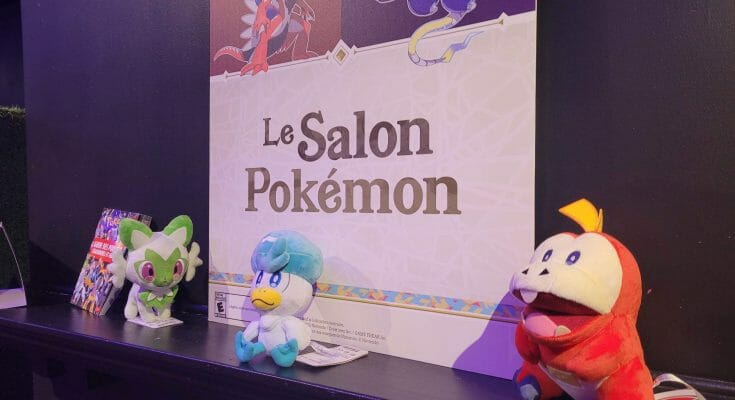 On Saturday, November 19, 2022, we had the chance to be invited by Nintendo to an art gallery in the Plateau Mont-Royal to celebrate the launch of the new episodes of the Pokémon franchise.

On the menu: snacks, activities, and most importantly, Pokémon video games!

As soon as we arrived in front of the external stairs, the tone was set; everything here would be Pokémon themed. Indeed, the exterior stairs were painted in scarlet and purple, reminiscent of the thematic colors of the new episodes (I chose the red side, obviously).

Inside, a buffet of themed treats awaited us, in addition to popcorn in bowls bearing the image of the two new legendary Pokémon, Koraidon and Miraidon.

A host of activities had been prepared to mark the outing in a festive atmosphere; Pokéball decoration, trivia contest (unfortunately we arrived too late to participate, but we are confident that no one could have matched our knowledge of Pokétrivia).

Also hidden throughout the room were very cute plush toys with the effigy of the three new starter Pokémon: Poussacha, Chochodile and Coiffeton (Sprigatito, Fuecoco and Quaxly respectively in the language of Professor Juniper).

We came close to hiding one in our backpack, but we wouldn’t want to incur the wrath of Officer Jenny.

But obviously, the centerpiece of this presentation was the games themselves. On one side of the room, we could play on televisions in docked mode, while on the other side of the room, we were offered the game in portable mode (which also allowed us to enjoy the screen of the OLED Switch).

We will not hide; while Pokémon Scarlet and Purple are fun, they don’t look good visually. Players have not ceased to make fun of the many visual bugs and slowdowns that can be observed at all turns, not to mention the textures of the scenery that seem to be a few generations late.

But that being said, the few children present did not seem particularly moved by these technical failures; On the contrary, they were charmed by the new creatures, like the big adult children who accompanied them (yours truly in the first place).

Pokémon Scarlet and Purple may not be a technical tour de force, but the creatures all cuter than the others (crush on Briochien, the brioche dog that is simply chewable) and the open world that offers an addictive experience seem to be enough to conquer a new generation of Pokémaniacs.

Thank you Nintendo of Canada for the invitation!