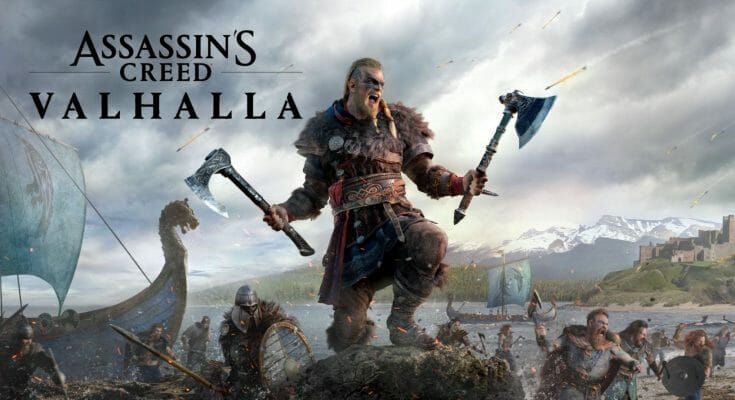 Abstract:Set in 873 AD, Assassin’s Creed Valhalla tells a fictional story during the Viking invasion of Britain. The player controls Eivor, a Viking looter who is involved in the conflict between the Brotherhood of Assassins and the Order of the Templars

A very long game, which will take you hundreds of hours to finish if you want to finish everything.

Many difficulty modes and accessibility options are available to everyone. Really nice to be able to adjust the game according to his needs and abilities.

Lots of violence, fighting, murder. Players use swords, axes, arrows and bows. The fighting is punctuated by cries of pain and blood effects. Some weapons can behead enemies.

The game also contains sexual material: one of the missions takes place in a brothel/closed house. There are topless women there. Kisses are depicted before a sexual act. When the sexual act is to take place, the screen darkens, and moves on to the next scene. So there is partial nudity.

Some sequences may contain screen distortions and alternating movements if the player’s character chooses to consume mushrooms or mushroom vapours. So there are references to alcohol and drugs, but all related to the times.

Many swear words, threats appear in the dialogues.

There is foul language with threats and swear words used in dialogues. As much in the chosen language as in the Norse dialect.

Just the feeling that the main character belongs to a tribe and he/she is fighting to defend his or her people. You can choose the sex and physical characteristics of the character at the beginning of the game.

It is possible to buy extensions called “Season Pass” to extend the adventure. These will come out over the years. The Season Pass has a mission called The Legend of Beowulf, which talks about the secrets behind Beowulf. It’s available now. There is another mission called The Wrath of the Druids, which will lead your quest to Ireland. And the last mission that will come out in the Season Pass is called The Siege of Paris, and will take you into one of the biggest Battles of Vikings in the walled city of Paris.

It is also possible to buy virtual currency to unlock exclusive weapons and costumes. All of these purchases are optional however, they will not affect the main quest.

You follow the adventure of Eivor, a character who can be male or female depending on your choice at the beginning of the game, in a Viking adventure during the invasion of Brittany in the year 873. You will follow this story thanks to the genetic memories disseminated by the Animus, a fictitious machine that allows you to relive the memories of ancestors, through the eyes of Layla, a young woman of modern times. Mixing science fiction and history, the game guides us on a most enjoyable Nordic adventure.

Assassin’s Creed is a series that was born in the studio of Ubisoft Montreal in 2007. The company has since released twelve world-renowned titles in this series, known for their historic reconstruction. The game is also known for its multiple forms of “parkour” since the release of the first installment. The character can climb buildings, run, etc. All this while maintaining a certain fluidity of the game.

The player will be given various tasks in order to provide for his clan. He will have to find materials to make his weapons more efficient and he will meet various characters who will have an impact throughout the story. In the end, he will have to face various choices that will evolve the game.

The local game mode is played to one player only.

If there isn’t really a multiplayer game mode, there’s a certain way to play the game in multiplayer. This mainly relies on creating a mercenary Viking that will allow you to make invasions online.

Despite its violence, Assassin’s Creed Valhalla remains a historically faithful game that fans around the world are enjoying. The universe is rich, immense and very immersive. You don’t have to do the other titles to live an emotional story.