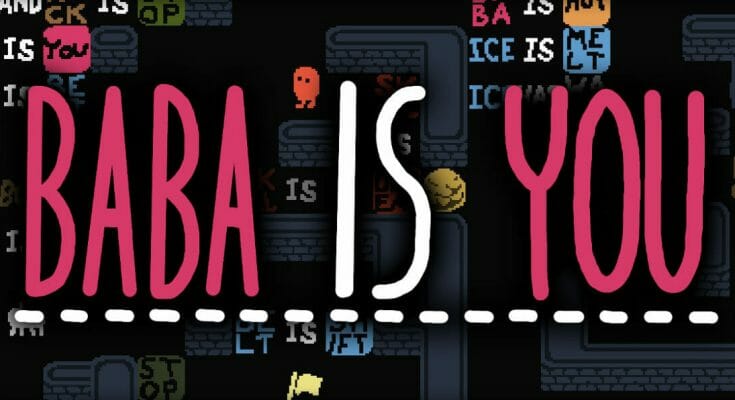 Baba is You is my reward for digging for obscure and innovative indie games. It’s so simple that anyone can play it, but so complex that your brain will split in two. It reminds us of the power of words, the fragility of the universe and the frivolity of existence. Otherwise, it’s ben ben fun.

At the sight of the first trailer, my eyes lit up. I dreamed as I imagined the infinite possibilities that its game mechanics could engender. It was my next “The Witness,” my next obsession. It was going to be one of those ingenious puzzle games that doesn’t take the player by the hand, that lets him experiment.

Then I got my hands on a copy of the game. I was nervous. I told myself that he would certainly not be able to meet my expectations. 5 minutes later, one of the puzzles from the first world made me fall down from my chair. A few minutes later: again. Then again, and again. And it won’t stop for the next fifteen hours.

Imagine a simple sokoban. A puzzle game where you push crates to a specific point. Now imagine that crates are words and their arrangement changes the rules.

Baba-is-you: You control a little character called Baba. But what happens if we slip the word “Rock” instead of “Baba”? The rock is then controlled. The basic objective is “Flag-is-win”: the flag is victory. If you touch it, the level is successful!

But it goes much, MUCH further than that.
A key, a door.
What if you were the key?
What if it was the wall that was crossed out and the door was the key?
What if the wall was you and the Baba was the victory?
What if emptiness was an object? Can we move it? Can we be THE VOID?!

It’s completely ins denial. I finished several levels with a huge smile in my face, while I had never seen the trick coming, like the “punch” of a good joke. Each puzzle is a magic trick that you do yourself. We are both the audience and the magician. It’s great.

“Every puzzle is a magic trick you do yourself.
We are both the audience and the magician. It’s great.” – Me, 5 seconds ago

We can use all the words within our reach and use them together.

Of course, some words/rules are inaccessible, shielded behind walls, or running along the edges of the level to prevent you from changing them, but all the rules are displayed on the screen. After an overview of the level, we understand what we must accomplish and the specifics of the challenge.

As I always repeat, the best puzzle games are those that give you all the elements in your hands in a visible and clear way, so that nothing hinders your thinking. Minimalist graphics (I didn’t say “beautiful”, I said “minimalist”) contribute to this zenitude where we can simply look at the screen and start solving the puzzle in our head. One could even print a screenshot and solve the puzzle on paper. It’s like a puzzle rather than a physical problem, unlike a Snakebird or Stephen Sausage Roll where the game’s physics becomes too difficult to predict at some point without going through trial and error. Be aware that moments of “classic sokoban” in Baba are rare: few space management puzzles, many twisted logic puzzles.

Apart from the discovery of new words (something that happens very often), nothing is left to chance. Each block is meticulously placed to force you to find THE right solution. It’s more like a The Talos Principle where you’re proud to have found the trick, rather than a Trine where you wonder if it was the real solution or if you cheated unintentionally.

Most of the minimalist puzzle games I’ve had the chance to try on Steam often have the same progression curve: one-third of the game is made up of easy levels introducing mechanics, the second third is made up of moderately difficulty levels, and then a finale where the game reaches its full potential. We get to the interesting point, then in time to say it, the credits scroll before our eyes.

You will be happy to know that this is not at all the case with Baba is You. From the first ten puzzles, we fall into the “thinking outside the box”, already very crispy levels, full of surprises. The complexity surpasses similar games on Steam in the first hour!

Stuck in a platformer like Celeste? A few dozen tries and the “muscle memory” is triggered: the repetition of the same course gives you a hand and you will eventually succeed. Is an RPG boss too difficult? We turn around, a little grind, and we come back stronger than ever. In a puzzle game like Baba is You, difficulty is the limit of your logic and resourcefulness. There is no easy way out (apart from consulting a walkthrough), but you can imagine that the pleasure of success is all the more satisfying.

The most breathtaking thing about all this is that it was developed by one person. Arvi Teikari (aka Hempuli), originally from Helsinki, Finland, concocted this concept during a game jam in 2017. His prototype caught the attention of puzzle lovers, so he continued the experiment, eventually making it a complete game.

And it’s very, very comprehensive, by the way. 200 puzzles. So far, I’m at about 80, stretched over a 13 hours of gameplay. It’s well worth the asking price, for families of the $1 per hour rule. $18 for the best puzzle game I’ve played in years is almost given.

10/10?!? Of course! One can’t ask for better than Baba is You in terms of puzzle game. Each level reinvents its own rules and constantly surpasses itself, to the point of pure madness. It reaches its potential and even more, and for a one-person project, it’s an accomplishment worth celebrating.

One can’t ask for better than Baba is You in terms of puzzle game. Each puzzle reinvents its own rules and constantly surpasses itself, to the point of pure madness. It reaches its potential and even more. Much more.