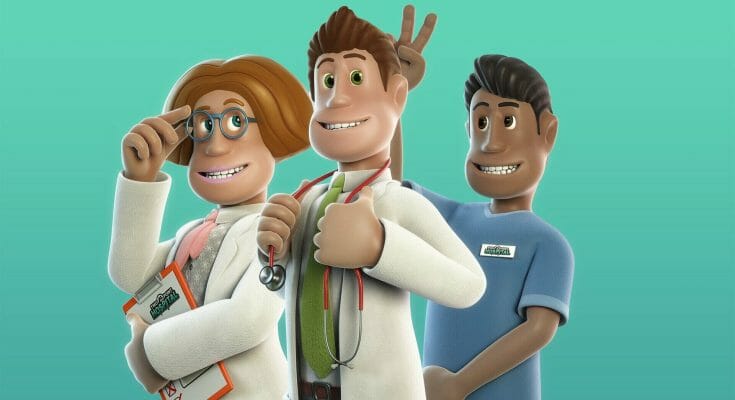 In 1997, developers Bullfrog and publishers Electronic Arts, building on their success with Theme Park, launched Theme Hospital. This is a hospital management simulation. Players then design their hospitals by deciding on the layout and size of the rooms, the staff to be hired, their well-being, while managing expenses, and treating multiple patients with wacky diseases.

The title was very popular at the time and met with some success, however following the acquisition of Bullfrog by Electronic Arts, no sequels were born.

Their purpose? Make a suite at Theme Hospital.

So it was on August 30, 2018, after 2 years of development, that Two Point Hospital was released on Steam on PC, being published by SEGA.

A big question remains: Is Two Point Hospital up to its ancestor?

The name of the 2 games differs a bit but all the gameplay is back.

New wacky diseases too, with new ways to treat them while in animation.

Doctors can now be women and nurses finally accompany nurses. At the time, it was a memory limitation that prevented employees in your hospitals from choosing their professions.

The game has naturally gone from 2D to 3D, and you can turn the game field in all directions, zoom in and finally see the assets that you could hardly see behind the walls before.

Similar operation also for this title; you are given an empty hospital, you add rooms for general practitioners, pharmacies, toilets, a reception, a rest room and adequate staff.

Sometimes your staff will be overworked at times.

You manage the payroll, the operating costs, the level of happiness of the entire population of the hospital.

You add appropriate rooms every time a new disease arrives, and when you fulfill all the goals, you can take it to the next level… which is another empty hospital but with new challenges and diseases.

The game is almost a remaster of its predecessor and it’s not a bad thing, the recipe worked very well before and it’s been 21 years since we touched it.

It’s very nice to change your mind with a game less stressful, more fun than the rest of the current productions.

There is no need for superhuman reflexes, or techniques to learn, just logic to understand with its share of unexpected events.

I can only advise everyone on this title. To try it is to adopt it.

Two Point Hospital was provided by the publisher.

Screenshots made directly in the game.

Compatible on Xbox Series and Playstation 5