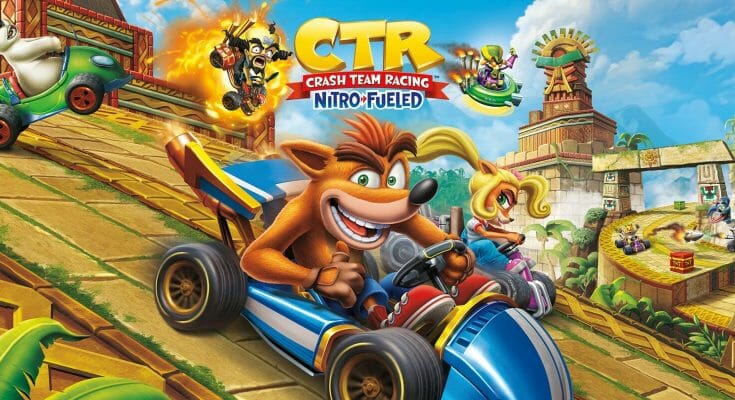 Once upon a time, the first Playstation

Released in 1999 on Playstation 1, Crash Team Racing (CTR) was the result of Naughty Dog’s mastery of the console hardware. They had developed many techniques to achieve Crash Bandicoot 1, 2 and 3.

At the time Mario Kart 64 was out, and many competitors were trying in the genre without ever being able to match nintendo’s kart game.

It was in this context that Crash Team Racing arrived, with a playable 4-screen multiplayer mode on a split screen, a rarity at the time.

Some editions of the game were also sold with a Multitap, an accessory that allowed you to add controller ports to your Playstation 1.

We arrived in 2019, 20 years later, for a remake of this game that surfs on the success of the original trilogy redone 2 years ago. But Crash Team Racing: Nitro Fueled (CTR:NF) is not just a remake of the first CTR: it also contains the characters and circuits of Crash Nitro Kart, a sequel released by Vivendi/Activision after buying the franchise.

Crash Team Racing: Nitro Fueled is directed by our Quebec City neighbours, the Beenox studio, owned by Activision, and is released on Playstation 4, Xbox One and Nintendo Switch.

Knowing that Crash Bandicoot N. Sane Trilogy was released a few months later on Steam PC, there is no doubt that this kart game will also arrive on this platform.

This title contains all the original CTR modes:

The Playstation version features some exclusives such as Retros skins (where Crash, Coco and Neo Cortex appear with very few polygons as at the time), and an additional Retro Playstation circuit.

To finish the enumerations, know that the game has 25 characters and 31 circuits (30 on Xbox One and Nintendo Switch).

It’s nice all this content, but what about when you have the controller in hand?

Well, CTR’s handling has been taken over to perfection. Accelerations, jumps that turn into Drift or Boost, it’s all there. No driving aids on the other hand to possibly help new players. They’re going to have to learn the hard way, like we did 20 years ago. The bonus items that we collect from the crates with question marks barely help us. It really takes a lot to train to get through all the challenges that the game offers. If Mario Kart can change position in the race, at almost any time, here, just as in Sonic Racing, all movements, trajectories, risk-taking count. The turns are optimized, the circuits work to be controlled.

The circuits, moreover, have been completely redone and strictly follow the trajectories of the original games. They are quite difficult and they have become beautiful in the meantime. Effects of light, reflections, water, mud. The game is very enjoyable to watch constantly.

The old configuration of buttons takes a little time to get used to (hello the accelerator on Cross/A) but it’s either this one or an alternative configuration that I do not find more intuitive.

It is also possible to change the music of the game to listen to the original soundtrack.

A store exists to buy additional content, but for once, it’s a store where everything is bought with the game’s currency. Prices are normal and nothing can be bought with real money. That’s a very good thing.

So you can get some characters, skins, animations, kart skins, decals for your karts.

Because yes in this game, you can fully customize your kart from top to bottom, it goes from the appearance of your character to the color of the wheels of your vehicle. It’s all there.

Although demanding, the game remains very enjoyable to play constantly, and of course especially in multiplayer with different battle and racing modes. Again, there’s plenty to do.

The game runs in 30 frames per second, regardless of the console or game mode. Some will complain that it’s not 60 images, but honestly it’s not a problem, and the game is stable and fluid at all times.

To conclude, Crash Team Racing: Nitro Fueled has massive content and is likely to please everyone. It is very well done and is enough on its own, no shady DLCs or content to buy with real money. Beenox deserves our congratulations for their excellent work. However, the game is much more demanding than a Mario Kart, and will reward the players who work on it.

Released June 21, 2019 on Playstation 4, Xbox One and Nintendo Switch

In the August 2019 update of the game, Activision has added microtransactions that allow you to buy virtual objects and characters with real money.

In addition to this, daily, weekly and monthly quests have been added. These are many free 2 play practices designed to make you spend money unnecessarily on a game that doesn’t need it.

If you’re worried that your kids are playing the game and spending your money unnecessarily without doing your money on purpose, you can get Mario Kart 8 Deluxe or Team Sonic Racing instead. Both are very good titles and do not have any manipulative practices to make you spend money.