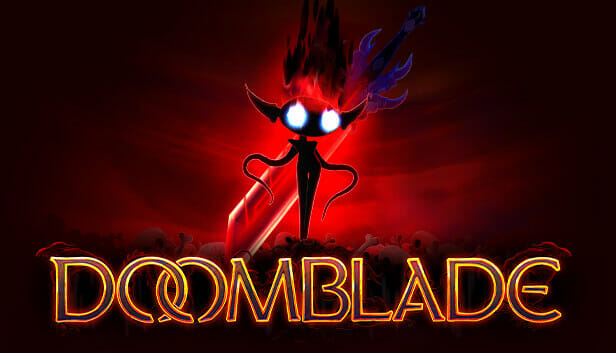 Doomblade is a 2D action and platform game.

“In the depths of the basement, Gloom Girl discovers DOOMBLADE, a smart weapon that seeks to escape after years of imprisonment. Together, “Doom and Gloom” embark on a brutal quest to unlock the powers of the Void and destroy the Dread Lords once and for all in this 2D action Metroidvania.”

A Metroidvania is a game where you move through a maze and learn skills as you go that will serve as keys to unlock other parts of the maze.

Here is the presentation of one of its co-creators Juha Ylimäki of Muro Studios, a Finnish studio.

Sorry for the poor sound quality.

And I was able to try the game at Gamescom, and it’s really one of my favorites. It’s beautiful, very well animated, very playable. It looks like Muramasa the Demon Blade, but it’s not exactly the same kind of game.

We control the Doomblade on the keyboard with the WSAD keys to move, and we aim and attack with the mouse and its left button. This allows you to choose your target anywhere on the screen at any time.

And it’s fabulous. The feeling we have during movements and attacks gives an impression of overpower. There are also many puzzles based on the mechanics of the Doomblade. You can indeed aim at what you want among enemies and targets on the screen, and therefore you can cross walls and obstacles at full speed.

Sometimes you have to eliminate enemies in an order, trigger mechanisms before attacking a boss.

The game is a lot of fun, and speedrunners (people who finish games as quickly as possible) should have a blast.

For now Doomblade is planned on PC, on Steam. You can add it to your wishlist here.