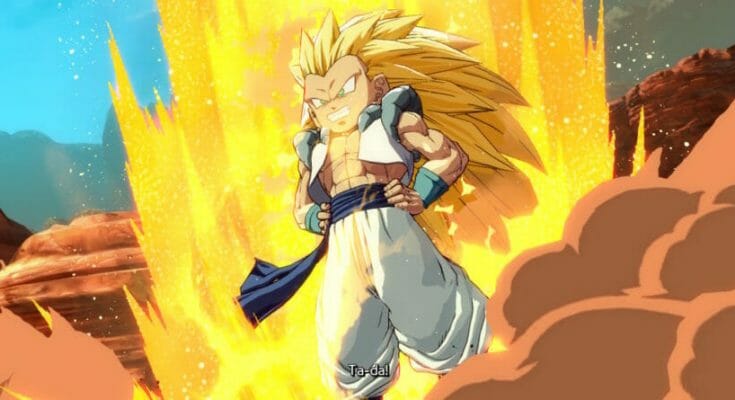 Previously in the galaxy of fighting games:

Dragon Ball FighterZ was released on PS4, Xbox One, and Steam in January 2018. Everyone loved it: fans of the series are thrilled, fans of fighting games too because it’s worth lingering technically.

The game sold 2 million copies in a week after its release. It broke the records of the best-selling Dragon Ball game, and the number of simultaneous players on Steam among the fighting games.

For those who missed this year’s event, Dragon Ball FighterZ is a 3 Vs 3 fighting game developed by Arc System Works (BlazBlue, Guilty Gear,…) using the Unreal Engine and published by Bandai Namco.

The graphics are in cel shading and the animators have reproduced many scenes from the cartoon to make the game as accurate as possible.

The Switch version arrives 9 months later. It was announced at E3 during Nintendo Direct.

Now the game is playable everywhere thanks to its port on this new console.

It’s all the same

All characters from previous versions are playable or buyable as on other platforms.

The blue Goku and blue Vegeta unlock either by pre-ordering the game or via the gameplay.

The eight characters of the Season Pass are identical and are all available on Nintendo’s eshop (the 8th character: Android 17 has just been released on all platforms at the same time as this Switch version).

The game always features its spectacular fights, destructible levels and its 60 FPS in TV or portable mode.

For now, this version has longer loading times than I remembered on PS4 or PC. In addition, there are very minimal framerate drops at the very beginning of each fight, and during the versus screen showing the 6 images of the opponents. No doubt this will be corrected in a later patch.

It took me a while to notice, but you should know that during some furious animations, 3D models suddenly lose in detail. Indeed, the resolution of the characters decreases when the screen is loaded with special effects. It’s not very disturbing at first, but when you start to notice it it denotes.

I wondered by what miracle the developers had managed to make the game work on this console less powerful than these competitors … now we know. This must have been one of the only ways to keep the framerate constant from 60 FPS. This doesn’t happen constantly but only during the most performance-hungry animations like Gotenks’ Level 3 Fury.

There is a simplified control mode for this Switch version; in this one:

However, this is a habit to take and it is possible to change between the two modes of control.

The Switch version has another peculiarity: it connects 1 to 6 controllers in order to play with as many participants.

Anything is possible: 1 joy-con per person, or a pro controller.

This is a very rare feature that I hadn’t seen since Marvel Vs Capcom (Dreamcast) and Street Fighter X Tekken (PC, PS3, Xbox 360). At the time it was able to connect to 4 players, with 2 players in each team. It’s just great and it allows you not to necessarily compete but also to play in cooperation and in a group. So players with different levels can help each other and balance teams.

In terms of netcode,I was able to have very decent matches like matches with a lot of lag. Given the number of players on this title, it is possible to find someone near you easily. The matches are then playable without too many problems. Note that Switch users play mostly Wi-Fi, so there is a better chance of having bad connections than other media.

DragonBall FighterZ has plenty to keep you busy for hours with its plethora of game modes, fighters. A season 2 of content is also expected next year. Nothing announced at the moment, but with such success, the developers would be wrong to deprive themselves of it.

So knowing that the game is available at regular discounted prices on the other two platforms, who is this product for?

The game just came out on this medium is the time to learn and with the Christmas holidays, no doubt many children will get the game. It is totally adapted to their age and it is therefore possible to play it as a group, as a family.

This version is very correct and a good starting point for fighting games also.

Only the controllers are not adapted to the genre but you can get used to it.

Images from the Nintendo Switch version, captured directly in the game.

Available for $80 in physical and digital versions.