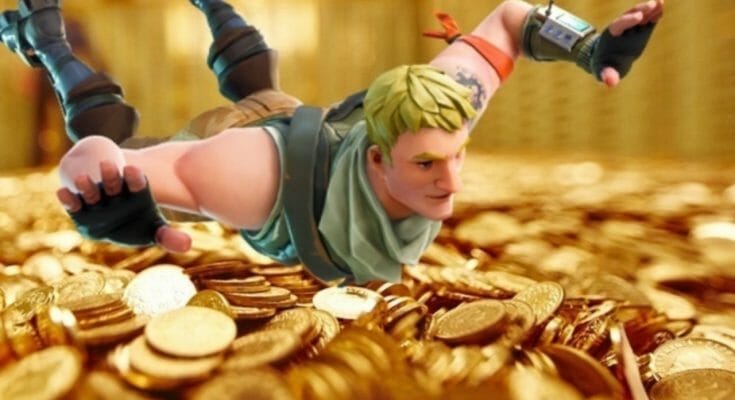 Fortnite is a mainly Battle Royale game. Each player faces, with firearms or white, 99 other players on a desert island. The one who survives to the end is the winner of the game.

Fortnite is one of the most played games in the world, with more than 125 million players. And it’s a free game that’s available on all consoles, on PC and MacOs, on iPhone and Android phones.

Epic Games is the studio that developed the game. In 2018, Fortnite brought in US$2.4 billion.

But is it a free game? How does it make so much money?

Instead of charging players a price to acquire the right to play, Fortnite offers a free “right to play” but possible purchases in the game’s interface. This type of purchase is called “microtransactions.”

Purchases can be made with small or large sums. Some amounts even exceed the price ($80 plus taxes) of a standard new game.

The first strategy is:

When you want to buy anything in the virtual store of the game, you can’t do it with Canadian dollars directly, or U.S. dollars! You need V-Bucks, a virtual currency only available and valid in Fortnite. It is linked to your Epic Games account and cannot be exchanged or sold to other players.

You can only spend it in the game.

Having a virtual currency makes it possible to not realize how much you spend in the game.

It actually takes $13 to get the suit.

And you can’t buy the amount of V-Bucks you want. It’s just by amount preset by developers:

Want to buy 1200 V-Bucks? Either you buy twice 1000 V-Bucks, or you buy a higher amount from the 4 choices available.

Of course the higher amounts are more attractive because you have more V-Bucks for your real money. And now you find yourself spending $26.79 to get the costume that’s disappearing soon.

Because virtually every item in Fortnite’s virtual store has a countdown. Discounts are limited time, so are object packs.

Only 22 hours to buy the Flash! Otherwise it is replaced by something else. The virtual store pushes players to make a choice, to make a decision quickly, to make a compulsive purchase.

Epic Games uses a well-known process: the FOMO syndrome (from the English Fear of Missing Out). The fear of missing something.

And this process is used excessively everywhere including in the third strategy, the combat pass:

For 950 V-Bucks, or about 10 Canadian dollars, Fortnite lets players buy a BattlePass that exists for a limited time. The more players play games, the more level they level up in their BattlePass, allowing them to unlock rewards as they go along. The awards are costumes, visual effects or other cosmetic objects that do not change the performance of their character, but that makes the character cool.

To get all the rewards of this BattlePass, it takes about 75 to 150 hours of play…. which is quite monumental. Or you can pay, to unlock many rewards directly.

This system favors well-paying players, allowing them to dress their character in a backpack or a particular appearance.

But if it doesn’t change the strength, or accuracy of the character in the game, why buy these costumes?

Several reasons, when you play multiple hours in the same game, you want it to change, you don’t want to see the same characters all the time.

We also want to differentiate ourselves from the other 99 characters on the map. Epic Games has made numerous deals with DC Comics, Disney, Star Wars, Marvel, Capcom, Walking Dead, so you can disguise your character as The Mandalorian, Iron Man, or Chun-Li.

Another reason is that it is important for teenagers to fitter in the mold. So if they play in a group in Fortnite, one of them will have the chance to buy a costume. He will make fun of others who do not have access to their parents’ credit card. The others are going to want to do the same, and tan their parents. Teenagers without costume or with ordinary characters are called “Bambi” by other players, even by strangers. There are a whole bunch of social codes online, and a huge pressure that is put on their appearances and behaviors, even on the Internet(Source: The World).

Also, ridiculous as it may seem for an adult, it is nevertheless very real for them. It reproduces the social patterns of online playgrounds as well. You then have to have the best clothes, …. “class.” Of course, the game’s developers take advantage of this, and do what they can to exploit it. Everything is designed to frustrate and push to buy.

While video games are supposed to be outlets, loopholes, or entertainments, the same social pressure is exerted on children and teens online.

How do we protect yourself from it?

The examples shown here are just the tip of the iceberg, Epic Games and many other developers use many strategies to keep their players on the game, and then to make them pay. This will be the occasion for other articles on this subject.