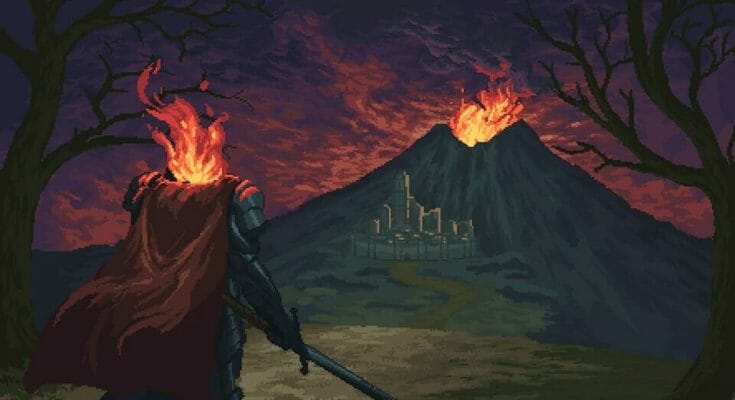 FORWARD: Escape The Fold is the first game published by Indie Asylum!

Indie Asylum is an accelerator/incubator that provides independent studios in Quebec with the conditions to grow. It is not only an investment fund but also a marketing, business development and contact support for independent video game developers.

Indie Asylum already has a dozen studios and wants to help more developers in the coming months. At the origin of this organization are three entrepreneurs: Christopher Chancey (also president of the Guilde du Jeu vidéo in Quebec), Kim Berthiaume and Pascal Nataf. All 3 are involved in multiple companies, and organizations and know the video game industry very well. They also worked on Rainbow Billy.

FORWARD: Escape The Fold features a hero who fights terrifying monsters in a world
underground, while collecting many objects to increase its power.

At each game the player starts again at the beginning and can try a new strategy against the new selection of monsters and treasures. Indeed, each game is randomly generated and the player is therefore faced with new challenges.

To move his character, the player uses cards that he slides to his new destination, whether it is a monster, a shield, a vial of life. If sometimes the choices are obvious: choose more life instead of losing health points to a monster, in other cases, you have to choose between several monsters, or several skills and make the appropriate decision.

It is therefore a game that can be played endlessly, and constantly find new strategies.

Designed by Christophe Coyard, from the studio Two Tiny Dice, this game for PC and Mac translates in a concrete way
the mission of Indie Asylum. The game is released on March 29, 2022.

The creator of the game, Christophe, was kind enough to answer 5 of our questions:

1) How did you come up with the idea for the game?

The idea came to me during the 7DRL game jam in 2019. I had played this game, coming from an earlier game jam: Deck Dungeon. I loved the simplicity of the concept. I wanted to combine this with a displacement mechanism and add depth via the possibility of creating a build. And that’s how the game was born.

From a narrative point of view, you have to travel and especially survive in a dark world called “the Fold”.
From a game design point of view, the game is a succession of micro choices. This is an important point for me, I like this approach that is accessible and simple.
I would say that the goal is to master luck (or bad luck haha) by creating the most powerful character possible and with the best synergies.

3) How did you choose indie asylum?

I am a Frenchman who lived in Montreal. I simply applied for a job offer and the contact with the members of indie Asylum was really good.
Later, they discovered the little game jam game I had made and pushed me to make a complete game out of it. They gave me total creative freedom and helped me a lot on points where I was less comfortable (audio for example or marketing).
I can’t thank them enough, it was an amazing experience!

4) What are the differences between the game jam and final version? do you plan to constantly update?

They are numerous because I redid all the code from scratch, so that it is clean and especially extensible for the future. If I had to make a quick list:
– the mechanics of the characters are much more diverse and deep
– there are now active powers (it was a request of long dates)
– a lot of additional content (maps, game modes, characters, achievements, scoreboard, etc …)
– narration between the parties
– the user experience is much better in my opinion

5) What advice for parents of video game players?

I think video games are a great way to empower, and not just for children. In my opinion, culture is most accessible when it is playful; it’s a real strength of video games.
I would advise parents to pay attention to the games that pass into the hands of their children obviously. To choose them, and test, themselves before (in the same way that we do not let see any film or series to a child).
I also believe a lot in serious games, which allow us to learn things without even realizing it.
Finally, I would perhaps advise them to play with their children, they are always good times to share.

Thanks to Christophe Coyard for his answers.