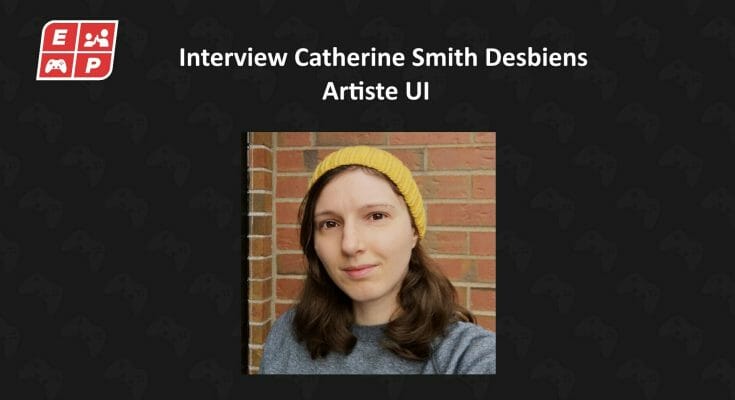 One day, during my multiple searches on the Internet, I came across the famous podcast / podcast Girls on Games. This is a famous English podcast about video games, geek culture. It was created by Leah Jewer and Catherine Smith-Desbiens in 2011 and they continue to produce new episodes to this day.

I appreciated the benevolent tone of the shows, joined their server Discord and found that they made it a point of honor to keep this benevolence.

Since that day, I’ve been constantly on their Discord server and I’ve met many members of their community at Montreal’s geek events, including Catherine.

Marc: Hello Catherine! Could you please tell us what your current profession is?

Catherine: Hello! I am an user interface artist. My job is not only to design the interfaces of the game but also to integrate them into the engine. It is a position that touches on several aspects of the UI (from English User Interface / for User Interface)including the creation of models, drawing icons and animate visual elements.

Catherine: No, it’s my second. My first job was web and marketing designer for the Ubisoft Store. It was a golden opportunity that allowed me to enter the video game industry while leveraging my many years of experience in e-commerce and digital design.

M: What studies have you done?

C: I did a bachelor’s degree (the “bachelor degree” in Quebec corresponds to the “license” level in France) in the arts with a concentration in graphic design. I learned the more traditional design, the print layout and the pre-press. There were no studies in web design or video games at the time. I also learned by myself HTML, CSS and JavaScript (web programming languages).

C: Oh, it was quite varied. I mainly worked as a web designer and front-end integrator (this is the visual part, interface, that the user sees. Unlike the back-end, which is all the code that is made and is invisible to the user).

I started my career in traditional media where I was a jack-of-all-trades of the web for radio stations. It was a very stimulating work environment. I have also been in agencies where I have worked on quite diverse web and marketing mandates. I was also part of the e-commerce department for a major women’s clothing retailer.

I was working in a marketing agency that specializes in producing resources for entertainment clients when a Ubisoft recruiter contacted me for a position as a web designer for their in-house e-commerce department. As the saying goes: the rest is history

What does a typical day as an User Interface Artist look like?

I’m working on a live game (a game that’s already out and gets updates after its release) so my day is probably very different from an artist working on an ongoing production. It’s a lot of small tasks here and there and every day is different.

A big part of my job is to support seasonal content such as designing and integrating resources created for Season Pass and event game modes. As we approach the delivery of a phase of seasonal content, we enter a period where we test and debug (solve the bugs that appear in the game) a lot. Otherwise, I’m working on projects to improve the game or deliver new features.

I love working on entertainment products. Working in video games, like when I was working in radio, is part of people’s daily fun. Playing a good game or listening to good music is the best part of my day. So I like to think that my job contributes to the best part of other people’s day.

I’ll tell you to remember the proverb of the poorly shod shoemaker. Working in-game makes you want to play sometimes. Working on your favorite franchise also means you’ll get tired of it. The important thing is to find a good job with a good team that values you and will help you evolve. This opportunity can be in a big box to work on an AAA game (a very big budget game, equivalent to a Hollywood blockbuster in the movie industry) as it can be in an independent studio working on a mobile game. Be open to anything.

Find Catherine on Twitter and Instagram. For more information about Girls on Games and their podcast, it’s on the girlsongames.ca. 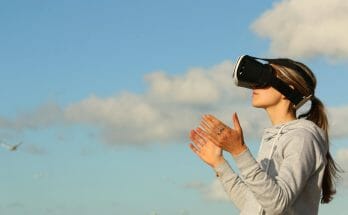