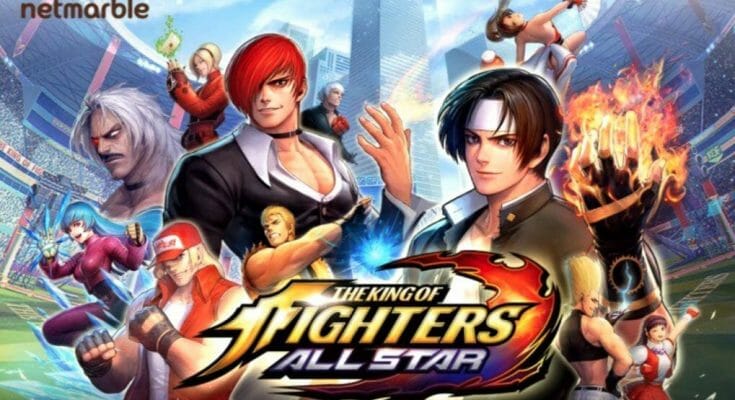 King of Fighters All-Star is a beat’em all with many role-playing elements incorporated. This is yet another attempt by SNK to hit the jackpot with a free-to-play mobile. The publisher had indeed tried Metal Slug Attack and KOF’98 UM OL before.

The game was made available in Japan on July 26, 2018 on iOS and Android. It has been available since October 22, 2019 in North America. It is developed by Netmarble games, the largest Korean mobile studio.

Obviously, the first thing that pushed me to try the game is the Franchise King of Fighters.

The visuals are very faithful to the original games so I installed the game.

And then I couldn’t launch it, for many days because of launch bugs that made the game incompatible with my device.

When I finally found a technique to make it work, I was able to test it. Well it’s very true to the franchise. The graphics are beautiful, the models of the characters are beautiful and one wonders why they were not used in King of Fighters XIV.

With each of the characters you get, you can browse the different sets of the series, and hit hordes of villains. Enemies and bosses can be both those in the series and new characters created for the occasion. The same goes for the characters in the story who will guide you through the different episodes; 94 to 98. Unless I’m mistaken, the story is a reinvention or rather reinterpretation of the original games. Many dialogues dot the episodes and delight adventure fans.

How’s it playing out?

During the action phases, you direct your character with your left thumb, as if it were a joystick, and the right thumb is used to click the buttons to trigger special moves and attacks. You can also change characters with the other 2 that you have selected beforehand. A striker/assist is also available and intervenes during the game as a computer-controlled character to help you for a short time.

If you’re loathed or tanned by fights, you can even rely on the computer to play the levels for you.

The levels complement each other, the characters evolve in many ways (levels, moves, affinity…), the currency diminishes and the game prompts us to make multiple quests to frustrate us in our progression and push us to take out the credit card to buy … loot boxes.

So yes, the work done by the development team is remarkable, yes it must be paid but perhaps not in this way.

Buy with real money loot boxes that do not guarantee us the character or the coveted object, but only a tiny chance to have it disgusts me.

How many times do I have to pay $20 to get Orochi Leona? The result is never guaranteed.

The game is, as they say in the industry, a gasha. (Derived from the name Gashapon which corresponds to the toys in the plastic balls that we buy and whose contents we are not sure).

Even after getting the character of his dreams, interest is not always there. The grind is real and everything is too much in this game.

Too many variations of the same character, far too many objects to collect to evolve this or that skill, too many quests in too many menus, too many levels to go, too many dialogues.

So make no mistake, I spent many hours on this title, of course all the addictive components of a free-to-play are there, but the realization, the quality of the gameplay are there too. It’s nice to see such a well-respected universe. It’s just that there are no stakes, no end, all you can do is pass the levels automatically if you want, and when there’s a little difficulty, you can either spend real money or grind a little.

Of course many updates with Halloween, Christmas, or cross-over events with Tekken have taken place and will continue to take place in the future.

Note that the game is quite resource-intensive and will drain your battery even charged on the area in a few hours. On a Samsung Galaxy S6, we notice many decreases in performance.