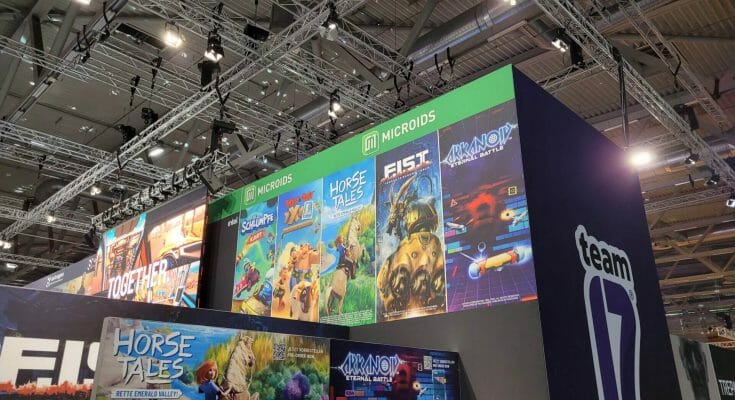 Among these games, I was able to test those of the French publisher and developer Microids. The publisher’s catalog is particularly provided with regard to children’s games thanks to its filiation with the licenses taken from the comics.

Gamers: “BOOUUHHH Microids, it sucks! They only release games that aren’t finished with bugs!”

Wow wait, unfortunately Microids has this reputation among avid gamers, and that’s right. They made the wrong decisions to release games before they were finished in the past. This was one of my first questions when I visited the stand. Believe me, they are well aware of that and they intend to remedy that. Their team is composed of many gamers and former editors of the French video game press.

They told me that so of course, they can’t fix everything, bugs preventing the player’s progress until the end of the game are either will be fixed in the near future. They now pay close attention to releasing games when they’re ready.

We will be sure to warn you if this is not the case.

Note that Microids games are very well distributed and available in stores in Europe. In Canada, on the other hand, I have never seen them in stores. You will have to settle for digital stores to get them (Playstation Store, Microsoft Store, Steam, Nintendo Eshop). Not ideal for some families who are not yet comfortable with this practice.

It is a single-player platformer where you play as one of the 3 Marsupilami of your choice. They all have the same skills: Jump, roll, crush the ground during a jump, in addition to movements and opportunities to run. The game is very beautiful, it plays very well. Some levels feel like a roller coaster, because of the number of events that take place.

This is really my favorite of the Microids range of games.

For gamers, the game is very much inspired by Nintendo’s Donkey Kong Country Tropical Freeze. And it’s not a bad thing, it’s nice and it’s nice to see the universe of marsupilami from this angle.

The game has been available for a few years now but an expansion (DLC) with new levels is coming soon.

So we advance in many levels by hitting the multiple enemies, whether Romans, wild boars or other dangers. There are many items that can be picked up from the ground and used against enemies, including Romans! So you can type Romans with Romans.

The levels are punctuated by mini puzzles/puzzles that involve the different skills of Asterix and Obelix. To a player we embody the 2 characters in turn. The second character is controlled by the console/PC and helps solve puzzles or follows the player.

A karting racing game with the Smurfs! Playable from 1 to 4 players. A simple game, with some circuits. It is very inspired by Mario Kart 8 Deluxe . It also has automatic acceleration, which can be deactivated. Unfortunately, I did not like the physics engine, that is, the feeling of controlling the vehicle is not pleasant, collisions with the environment and other vehicles react strangely.

The game will not have an online mode, and is only scheduled for Nintendo Switch at this time.

I know the game is still in development, but as it stands I can’t recommend it, especially when it comes out only on the console that hosts the masterpiece that is Mario Kart 8 Deluxe . To be reserved, to the big fans of the Smurfs, if the game is improved between now and its release.

Game for adults only

The Microids disaster… the one that has tarnished his reputation. When it was released on November 10, 2020, nothing worked.

XIII is a first-person shooter, you advance in the levels and story inspired by the comic book of the same name. The game was itself a remake of the Ubisoft title released in 2003.

Microids has now revised its copy, the development studio has changed, and according to my short test, it works well now. I played through a few levels. The enemies are very offensive, but this is played out without any apparent problem. However, the objectives are not very well indicated. You have to pay attention to all the dialogues, and the environments so as not to get lost. The level design does not guide the player well to the next steps to be accomplished.

Good news! People who purchased the 2020 version of the game are entitled to a free update with the new 2022 version.

Well it’s a shame to buy a game and only be able to enjoy it 2 years later, but at least Microids corrects its error.

Thanks to Alice, Maxime, Yannick and Pascal for their time, energy and hospitality on the Microids stand.