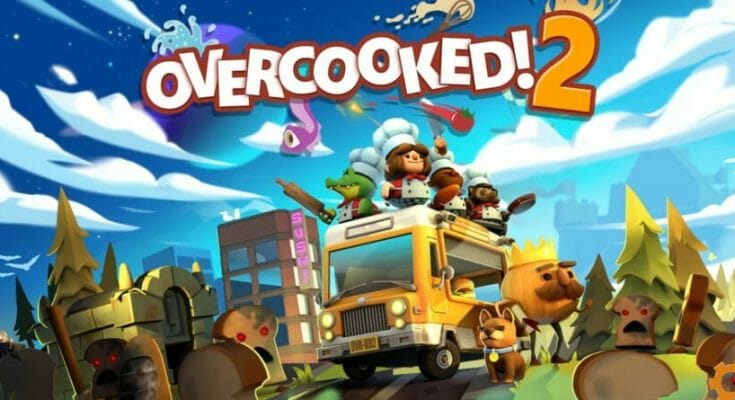 Released in 2016, Overcooked! is a video game from independent developers Ghost Town Games that had created the surprise by offering a frantic cooperative multiplayer gameplay… in a kitchen.

(Since the release of this article, many editions and versions of Overcooked have become available. Please see our dedicated article for more details)

Overcooked! achieved sufficient critical and financial success to warrant asequel. Still published by Team 17, and 2 years later, let’s go back to the kitchen to see if the recipe still works.

The concept is strictly the same as in Overcooked 1: From 1 to 4 players lead chefs who have to concoct dishes in wacky kitchens and environments.

The main novelty of this episode is mainly the online mode.

The game consists of 3 game modes:

Nevertheless only Arcade and Versus are playable online, partly public and private.

Let’s be clear from the beginning, Overcooked! 2 just like its predecessor is a multiplayer game, and I would even say it is thought for 4-player games. My 1, 2 or 3 player attempts are frustrating.

To a player as in episode 1, one alternates between two characters with a button.

The graphics haven’t changed either, the cartoonish simplistic style is back, and if you don’t know the games, I can show you screenshots of one of the 2 episodes without you being able to tell the difference.

I played very little at 1, and this second episode does not seem to take this into account.

Instead of guiding potential new players like me to each of the mechanics, he accumulates errors by imagining that everything is understood by the players:

So you’re going to have to redo the tables several times, always with the same time limit in order to succeed eventually and find a method to cook efficiently. This gives a puzzle aspect to the title that will require organization between members of your team. A training mode without a timer would have been more than welcome.

Another novelty of this title is the ability to throw your ingredients forward when they are believed only. If at first you’re going to wonder what’s the point of doing it, you’ll soon realize that some levels have been designed around this mechanic.

Sometimes you will have to throw your fish and pieces of meat to your friend on the other raft, or the other hot air balloon, so that he can cut them, cook them and send them to you for you to collect and serve.

This adds a new way of thinking in the paintings but as with the rest, it is introduced too abruptly in an environment that is constantly moving.

Other defects in visibility and manoeuvrability spoil the title with enormous potential:

In terms of online mode, I tried the game during the first days of the release on Steam, and I had a hard time finding people to play with in part public. I don’t know if it’s because of a difficult matchmaking algorithm or just that there were few people online for a game yet popular.

Once online, the games on the random levels go pretty well, however when it starts to have latency, our character suddenly finds himself teleported into the void (we then wait 5 seconds before reappearing), or we lose sight of the ingredients we wanted to catch. This does not seem very optimized for what I was able to test.

I was delighted when I tested the game with friends and at E3, the game was also strongly highlighted by Nintendo, but when I was able to dig a little and approach the game with more time, I unfortunately lost my enthusiasm a little.

Overcooked 2! is a valuable multiplayer game especially in the 4-player local. It lacks a big touch of polish on this title to become a must. It lacks settings, game modes, tables planned for less than 4 players.

If you want to get started, you will need a veteran player and/or a lot of perseverance to get through the forty tables. The Switch version contains additional content such as characters.

As with episode 1, DLCs will be added as time went by.