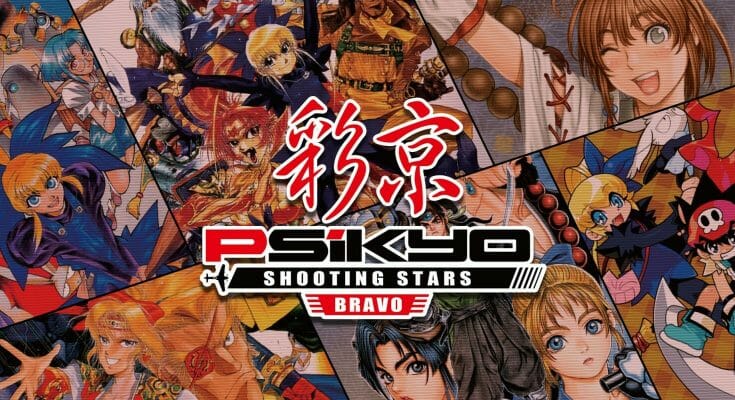 Psikyo Shooting Stars Alpha and Bravo’s menus and interfaces are the same, only the games included change. So the menu reviews will be the same between the two items.

Indeed, in Asia, the compilations were released 2 years ago and in 3 parts. The shoot’em up included in each of them was then numbered 4 and they were mixed to force the players to buy them all.

These are games by developer Psikyo (pronounced “Sai-kyo”, Japanese word meaning “strongest”) worn by Zerodiv on Switch and published by NIS America.

As for the Bravo version, there is a collector’s version of this compilation including audio CDs with songs from the games, and then some cards with drawings.

Psikyo Shooting Stars Alpha contains 6 games that we will detail below. Before that know that:

Shoot’em up vertical based on World War II. You choose one of the war planes and you will face thousands of tanks, aircraft carriers and fighter jets of all sizes. One shot, a loaded shot that launches a module and the usual Smart Bomb that cleans the screen.

Shoot’em up vertical which is the direct sequel to the title above. Same concept, more beautiful and with the appearance of a fury bar to reward the best players with a loaded attack.

Shoot’em up vertical which is the direct sequel to the title above. Same concept, always more beautiful.

The 3 titles are very nice to browse.

Shoot’em up horizontally composed of digitalized sprites, Sol Divide has aged very badly. It is hard not to see the effects of the time on this title. You choose between one of the 3 characters, and you will travel through a kind of heroic-fantasy world, composed of dragons, chimeras and other magicians. You can shoot, attack melee or cast a spell. You can choose between spells you pick up during combat, it can be ice, fire, lightning, etc. It’s strange to see your character flying swords and many enemies require more than one shot to disappear. It is a curiosity that can be worth the detour to travel with friends.

Shoot’em up vertical based on dragon overlaps. Much more classic in the image of the Strikers and Gunbird, Dragon Blaze follows the same pattern: browse many levels with colorful graphics, continuously shooting and also sending his dragon to attack. Really nice and very detailed

Strangely the first episode is not contained in the compilations. You choose one of the 3 helicopters. Shoot’em up hybrid, Zero Gunner has a special system: you pull with one button, you change your chopper’s orientation with another, and you shoot a loaded attack with the last button. The décor is constantly changing direction. Enemies are coming from everywhere. So we have to change direction all the time as well. It takes a little time to learn, but it offers an interesting novelty. Everything is in 3D and automatic scrolling will take you everywhere in urban complexes with buildings, factories, and of course against big bosses to face.

In the end, it’s really a collection for nostalgic players. Apart from Sol Divide, the games are very pleasant to go through. The price of the compilation is a bit expensive: $50 plus taxes. The collector’s version is really expensive and it’s not worth paying $30 more for CDs and cards with drawings.

If you’re particularly missing a game, you can buy it separately for about $10. Otherwise it’s always nice to browse the games with a friend, one afternoon.