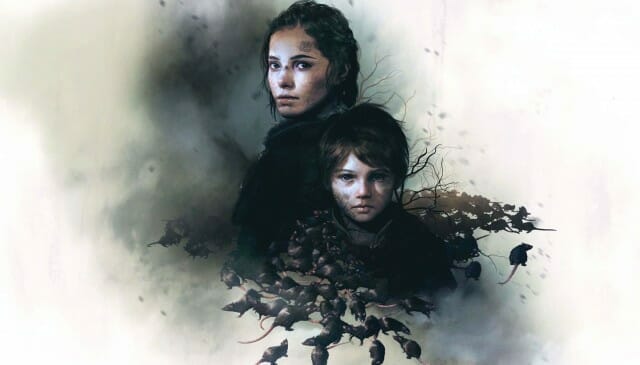 Amicia de Rune is a young noblewoman from Aquitaine who will have to protect her little brother Hugo. In: A Plague Tale Innocence, you will be pushed into a mysterious and frightening world. Flee the Inquisition and the Black Death in order to find the remedy that will allow him to survive his strange disease.

The game replays very well once the main quest is over, as it is linear.

The game has many puzzles and requires some skill in order to complete it.

There is blood, gore, violence and the game can be stressful at times. This game is set during the Hundred Hundred War and depicts scenes of violence and war that are relatively intense for sensitive hearts. We can think in particular of people who are impaled by spears or eaten by rats. There are also some rather violent scenes of people hitting arrows in their faces, others being impaled by swords and there are even corpses that are impaled at the end of spears.

Quite strong and a little vulgar. Enemies and soldiers can use an inappropriate language for young people.

The game is very immersive and it is a beautiful adventure of a sister who must protect her little brother. Although the player is immersed in a fantastic adventure, we can recognize some scenery inspired by the medieval period.

It is possible to buy extensions in order to give more choice of clothes to the characters.

Requires some reflexes and some skill to play it.

The world of Amicia de Rune is turned upside down when the Inquisition knocks on its door. She must flee with her little brother who is already weakened by a strange disease. She will have to protect him from the danger that the world of France will be subjected during the Hundred Years War and find a cure for his illness.

She will travel around France in search of what can save her brother from the strange disease, when the inquisition will be at her disposal. Throughout the story, learn how to use the powers his brother has over the rats of the plague in order to get you out of situations and unravel the mystery that surrounds your family.

This game is action and stealth style. There are times when you will have to react quickly to certain situations. Others will require a little more subtlety in order to cross the level. Have the powers of the little brother you will be able to solve some puzzles and go through the different levels.

It is possible to buy the DLC: A Coat of Arms. It includes three alternative clothes for Amicia and a coat of arms for Hugo.

Although the game is linear, it remains an excellent story that never ceases to surprise. It remains a game based on historical facts with a nice fantastic touch. This game is very good for lovers of horror and story game.

More information about the game: Official page of the game on the Asobo Studio website