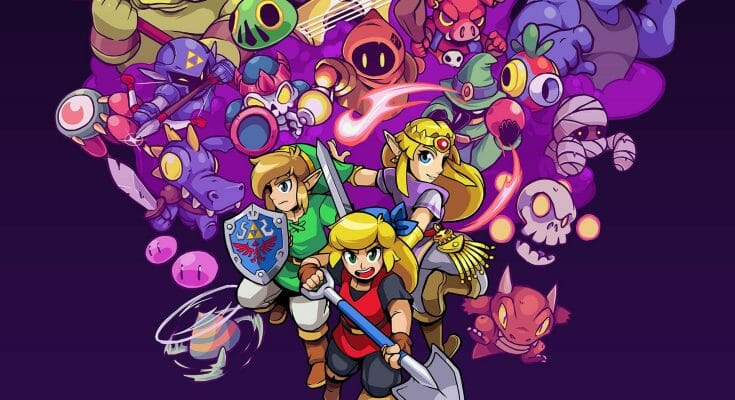 Play as Cadence, Link or Zelda in Cadence of Hyrule Crypt of the NecroDancer featuring the Legend of Zelda. This game developed by Brace Yourself Games will merge these two fascinating universes and will release in a 16-bit style a super interesting game.

The game is replayed very well. When you finish the game, it is possible to start exploring the map again in another way randomly generated by the game.

The game is a bit difficult. In order to perform, you have to follow the rhythm of the music in the game.

The music in this game is amazing and the principle is great. The characters you meet and the puzzles that are made will make your child think. Thus, he will have to show a little resourcefulness in order to get through the different levels in the game.

There are three additional extensions to continue the story of the game. It’s optional, though.

It takes a certain skill and good reflexes to get through the game.

You start the game with Cadence and quickly Link and Zelda join the fight. You will have to complete the various levels and fight the monsters that invade Hyrule to allow Cadence to return to his own world.

We can play this game alone or with two players.

There are three extensions with the Season Pass.

The Character Pack unlocks five additional characters and will give you a new challenge with two return modes.

The Melody Pack allows you to have 39 remix songs made by many different artists and you can choose or you will listen to them in the game.

The Symphony of the Mask Pack, will allow you to unlock Skull Kid, an important character in the series in a new story and new map.

You also have access to a bonus, the Season Pass bonus will give you access to new colors and variations for Link and Zelda.

Cadence of Hyrule is a game that takes us back to the nostalgia of the past with its graphics and simplicity. I recommend it to anyone who wants to play a Zelda that is out of the ordinary and gives a new challenge.