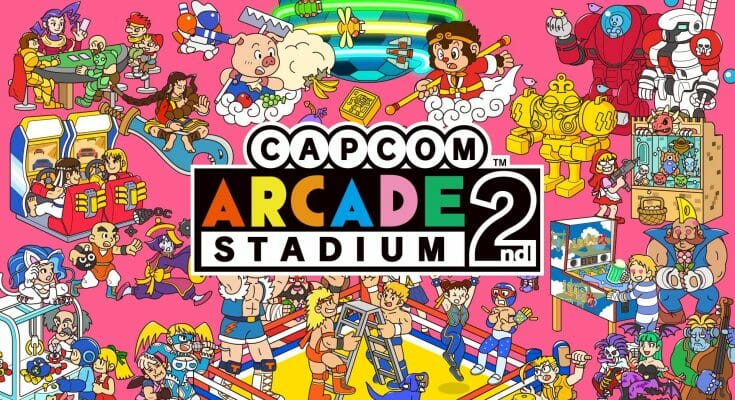 Capcom Arcade 2nd Stadium is a compilation of 32 arcade games released between 1987 and 2003 by game developer and publisher Capcom. This includes shooting, fighting, puzzle, action, and even compilation games in the compilation. Many of the tracks on offer have strangely already been released in previous recent Capcom compilations.

Average duration of a game: about 10 minutes

Estimate of the total duration of the game:
Infinite

Business model:
The base game is free, and features only one game: SonSon
The other 30 can be purchased together or individually.

Number of players:
1 to 2 players locally

Available in digital format.
Playable in English and Japanese

The game was provided by the publisher for its review.
It does not influence our opinion.

These are arcade games, which were therefore intended for players to put a lot of money in the arcade cabinet every few minutes in order to continue playing after losing. It is possible to reduce the difficulty a little, but it remains difficult.

Presence of blood when the fighters clash. Female characters are often with wide necklines and have many suggestive poses. Many allusions to sex appear. Some attacks make the chest of the characters enlarge, their buttocks, cut them into 2, turn them into other monsters. All this is animated as in a cartoon, depending on the sensitivity of the people, it can shock, or be innocuous and ridiculous. These are games from the 90s mainly, so the representation of the characters is tinged with this Japanese patriarchy.

Very little dialogue. Provocations at the end of the fights and sometimes sexual allusions in the dialogues.

Representations of female characters in sexy poses and in small outfits.

Must know how to read for a few years to understand the menus.

Each game is very hard and time-consuming to learn. Some can be enjoyed by playing occasionally, but they are much better when you exploit their potential to the fullest. Many complex manipulations are required to perform the movements of most fighting games. It’s even difficult to play it with an ordinary controller and we recommend playing with an arcade stick, because the games were originally intended for this.

Capcom Arcade 2nd Stadium is a compilation of the following 32 games in their versions as they were released in arcade at the time:

Each game is configurable in its difficulty, its number of lives, the number of damages, its speed. These are all the settings, called dipswitches, that arcade managers had available at the time.

In addition to that, players can save at any time in each of the games, in each of the 32 available slots. They can also speed up the game’s execution speed, slow it down, or use the rewind. The rewind allows you to go back a few seconds in time to cancel the last actions of the player and perform others.

Each game is therefore very difficult, because planned for arcades at the time. The rewind makes it possible to simplify this therefore. Capcom also provides free as downloadable content, the option to become invincible in each of the games. Do you want to get through the projectiles, the blows? Finish each game without a problem? You will be able to enable this option.

When we discover the compilation for the first time, we are assailed by many help windows that appear on the screen. At each menu, at each option, we are told how it works. This aid is appreciable but could have remained activatable at will.

If you’ve only bought a few games, the compilation keeps reminding you of all the other games you could buy.

Are available in Capcom Fighting Collection .

Are available in Capcom Beat’em Bundle.

In Capcom Arcade 2nd Stadium, none of the games have a Versus mode, or training, or online, unlike the 2 compilations mentioned above. If the operation of the compilation is very well explained in the game, it is far from being the case for each of the games. The player is left off guard, supposed to guess how each of the old titles works. The lists of special moves in fighting games are very empty and much less polished than before. And in addition, there are very few options to configure the combinations of moves. Again, something very well done in Capcom Fighting Collection.

The only advantage of buying the games already available in Capcom Arcade 2nd Stadium is the fact that you can buy them separately. Do you only want to play the excellent Super Gem Fighter Mini Mix for example? It will be possible to buy each of the securities for about 3 dollars.

It is possible to play many games with others, but it will only be in arcade mode. There is no dedicated multiplayer mode. That is to say that we have very few parameters, and that the winners in fighting games can not change characters between each match.

There is no online mode, but the game is constantly checking if there is an internet connection for online leaderboards or checking if one has purchased a new game in the compilation. On Nintendo Switch, when you play in portable mode, you keep putting the console to sleep and turning it back on. We then have an error message about the Internet connection every time we put the console to sleep.

Really unpleasant for arcade games that don’t need the internet.

Who is this compilation dedicated to? I don’t know. The best games are available in better versions in other compilations.

Each game is very difficult, and the aids to understand their operations and nuances do not exist. It will be necessary to go through, with the help of infinite credits, rewind, backups and invincibility (downloadable separately). It’s a shame, because these are games that reveal their potential when mastered.

The current controllers are not so suitable for these games of yesteryear either, because the games were available on arcade terminals and arcade sticks, allowing to combine button presses easily and execute diagonals without problems.

The best games in the compilation are as follows:

Only MegaMans are exclusively (for current consoles and computers) available in this compilation.

Among the incomprehensible choices, why Capcom did not add the titles present in this compilation in the first: Capcom Arcade Stadium. The interface and the economic model are copy and paste between the 2. I guess they didn’t want to lose players with 64 games in the same interface, despite the many filters available.

At 50 Canadian dollars, the asking price is a little too high. It will be necessary to wait for reductions to possibly embellish his collection with a new Capcom compil.

If you like Capcom’s compilations of old arcade games: