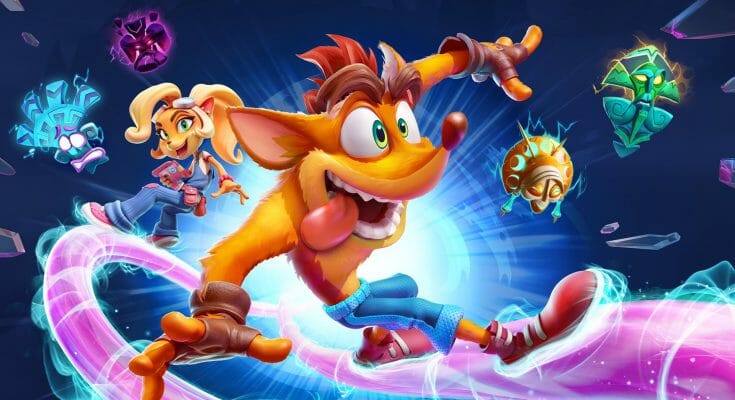 Crash Bandicoot and Coco return to save the world from a destructive force in a quest that will lead them to travel through time.

Lots of bonuses and items to collect. It is necessary to redo the levels and to fulfill certain conditions if we want to recover everything.

Even the most seasoned players will find it difficult in some places.

Vocabular that we hear in cartoons. You can hear and read the words “ass” and “batard” in the game.

The male and female characters are playable. They have bodies of different sizes.

There are a few places where alcohol is depicted as with jugs near a tavern, barrels, or signs with the word tavern. There is also a cartoon representation of a character vomiting.

Many dialogues are dubbed, but some explanations and narratives are only indicated in text form.

The character has many possible actions, and you have to execute them at the right time.

This episode is the fourth, officially, but there is no need to have played previous games to enjoy this one. Only a few jokes refer to the rest of the series.

It’s about exploring many different worlds with the character of your choice. Players help Crash Bandicoot and his friends travel back in time to stop a destructive force. Sometimes the levels take place from left to right, sometimes from the background to the foreground, or the opposite.

You have to jump from platform to platform, jump or spin on enemies (like dinosaurs, pirates, robots) to eliminate them and avoid obstacles. Enemies like lizard pirates use rifles, rockets, dynamite in the manner of a cartoon.

Crash Bandicoot 4: It’s About Time is a very good game that unfortunately has some difficulty spikes that can put off some players.

Players may feel frustrated on certain passages, but they must persevere to overcome all obstacles and defeat the game.

The game is very well done and it is a pleasure to travel the different worlds and eras. As time go by, Crash Bandicoot and his friends will recover new powers and costumes.