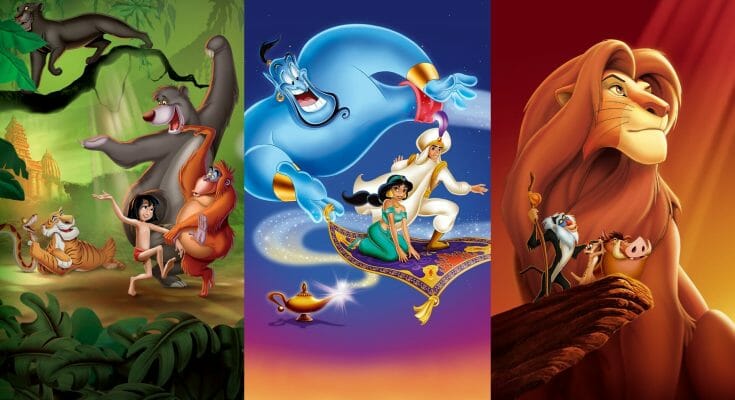 Disney Classics Games Collection is a compilation of the Aladdin, The Lion King and The Jungle Book games released for the SEGA Genesis, Game Gear, Game Boy, Super Nintendo in the 1990s. All of these games are adaptations of Disney’s eponymous films into video games.

Business model: Just need to buy the game once.
Languages available: English
Number of players:
1 player on the premises

Guards, birds, snakes, monkeys are attacked with apples or a sword for example, but everyone disappears into a smokescreen or an explosion. Nothing serious, everything looks like a cartoon.

It is necessary to dose these jumps and attacks or to use excessively the backspace function to get out of it.

Attention the compilation exists in 2 versions. A version with the Jungle Book and a without (previously released). Get the version with The Jungle Book. Otherwise it is still possible to buy it separately for owners of the first version.

These are many platform games where you sometimes play as Simba, Mowgli or Aladdin through levels that try to reproduce the key scenes of each film, with the limitations of the consoles of the time.

It is possible to go back during your game to avoid a mistake you have made. There are many display filters for each of the games, borders to display the game in 16:9. It is also possible to see the games played perfectly from beginning to end automatically. At any time, it is possible to resume the game at that time.

A Museum game mode contains a lot of material created and used at the time of the development of these games. These are game music, making-of videos and concerts, drawings. For historians and nostalgic for these games, it is a joy to see all this.

The quality of the compilation is very good. However the games are very difficult for 2 reasons:

Now, players benefit from many helpers in this compilation to browse the games. Children can have fun with the games, or get frustrated depending on their reaction to the often unfair obstacles.

The compilation is aimed more at nostalgic people who knew the original versions at the time.