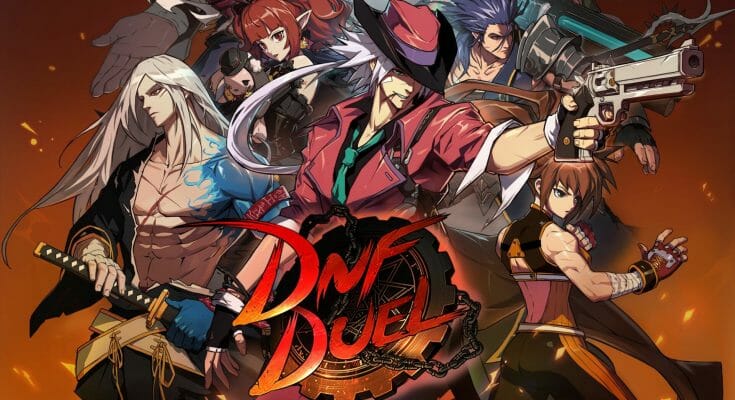 DNF Duel is a 1 vs 1 fighting game in 2D. It is the adaptation of the Dungeon and Fighter RPG franchise, in fighting game.

Many difficulty modes are available. And online opponents have just as many different skill levels and experience.

Whimsical fights with protagonists from manga. The fights do not involve blood, however some non-interactive cinematic scenes sometimes show characters with bloodied clothes or faces. One image quickly shows a monster body impaled by many weapons. Some female characters have revealing outfits, and bouncing breasts.

It’s quite sustained, the story is quite convoluted for each of the characters, and the texts are only available in English (or Chinese, Korean, Japanese).

Some women are depicted in sexy poses and in small outfits.

Must know how to read for a few years to understand the menus and history in English.

None for now, many characters and content will be available for purchase after release.

So for once! Here is an affordable fighting game in its maneuverability! The manipulations are very simple to perform: direction + button. Veteran players are rewarded by making quarterbacks but the advantage is minimal. There is a way to have a lot of fun with simplified manipulations.

The goal is to choose a character, and reduce the opponent’s life bar to zero by using attacks, special moves, tools available at the right time in the right situation.

In addition to the life bar, each of the characters has in a fight:

When the life bar is less than or equal to 30% of the starting length, the character can launch a move called Awakening. This one can be launched only once per Round, and allows to launch a devastating fury, in the form of a non-interactive animated scene, for the life of the opponent so well placed.

The game is played with 6 buttons:

All the subtleties are taught in the game’s Tutorial mode.

Free Battle Mode: Play against a human opponent locally, or against an opponent of their choice controlled by the console

Arcade mode: sequences of 8 fights up to an end boss.

Story Mode: Each character has a unique story, and just read it as texts and animations scroll across the screen. Fights punctuate the story. This lasts about 20 minutes per character. Multiplied by the 16 characters, this makes a lifespan of about 5 hours.

Survival Mode: Chain as many fights as possible without losing.

Player Match: It is a question of making unclassified games with opponents that we find in lobbies. Up to 8 players can meet in a lobby and 4 matches can take place simultaneously in a lobby. In a lobby, the player embodies an avatar that he can personalize, and converse with other players. It is therefore possible to chat with strangers in this game mode. This can be positive as well as negative.

If you’ve never played a fighting game, here’s the title for you! DNF Duel is beautiful, the music is very pretty, the game is easy to play, to take in hand and to learn. The part of the online game is for once (compared to other fighting games) very successful. Indeed, there is little or no slowdown during online combat. It is easy and quick to find opponents.

The characters are very well designed, drawn and animated. They are quite different from each other, there is something for everyone.

The launch price of the game is low: 65 CAD + taxes compared to the standard of 80 CAD + taxes.

Everything works, everything is sublime. There’s plenty to have fun for, for hours, if you have someone to play the game with locally, or you’re willing to learn the game and play online.

Unfortunately there is no cross-play, i.e. Playstation players cannot play with Steam players on computer. Information to keep in mind if you want to play with friends.

Video explaining the basics of the game

The fighting game player, host, TV presenter, Kayane made a video to present the basis of the game, in French. I share it here.