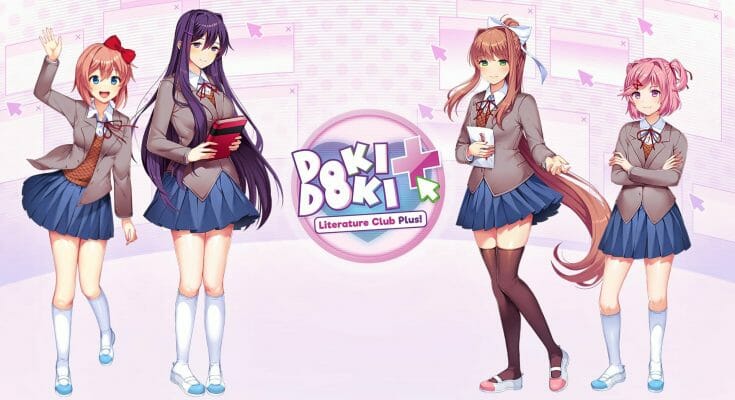 This game is not very difficult to play. It requires some thoughts for some puzzles in the game, but it plays very well.

There’s a lot of blood and gore. There is intense violence, suggestive themes and vulgar language. You play a character whose girls in the club try to have romantic interactions. There are themes of suicide and very intense violence. There are some fairly graphic references to emotional abuse and mental health.

Coarse language is used in this game. Some dialogues contain rather crude languages with suggestive themes.

Doki Doki Literature Club Plus is a very original game, which uses the visual novel style to become a fairly interesting horror game. In addition, they use the fourth wall, in order to get out of interest with the player.

Needs to understand and read well, because the universe is a bit complex and difficult to follow at times. In addition, there is a lot of reading and choices to be made.

There aren’t many button choices to learn to master this game.

You play as a young man whose name you choose. He is introduced by Sayori to a reading club with three other young women. The main character has the choice of having romantic interactions with all the girls.

Betrayals between friends, characters who commit suicide, the game that does not seem to work properly … This little game will make you live full of emotions!

The game can be played alone in order to make the main campaign.

There is no online game mode.

Since its release, new extensions have been released with new stories and music. Here is a link to understand the differences with the original game.

The game takes on a fairly popular romance style and knows how to turn it into a super interesting horror game. Personally, I find it quite creative and very original. Like what, it does not take great graphics to make a good horror game.

More information about the game: Official page of the game on the website of Team Salvato