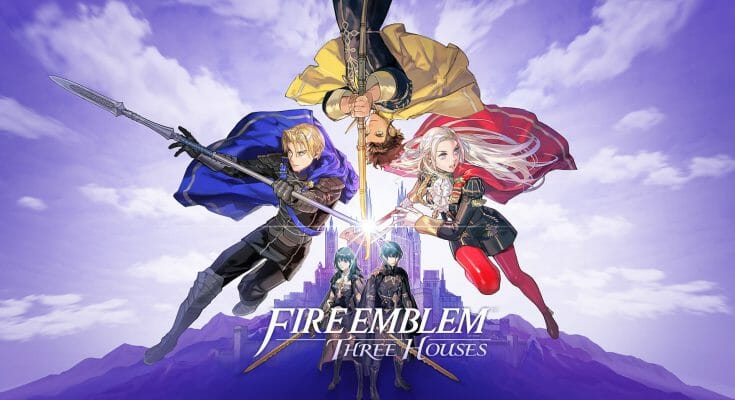 Fire Emblem is a tactical strategy game that takes turns. The game puts you in the shoes of Byleth, a person hired as a teacher who must lead a house, that is, a class of students who will have to defend the continent of Fódlan against enemies. The player can decide to join three different houses that each have their respective characters and scenarios.

You run a house, that is, a class of students who learn to fight to defend their country. The game mainly involves fighting against enemies in a level where the action of each character is played turn by turn.

During the fights, you have a bird’s-eye view, and you decide on the action of each of the characters. You start with a dozen characters in your team. As you progress through the game, you will get new characters. You can focus on battles that advance the main story, but you can also do optional fights that give certain bonuses (money, rare items, etc.). You can also do workouts that don’t really affect the game.

After each fight, you can explore the monastery which is sort of your team’s base camp. You can fish, cook, talk to your colleagues, buy weapons and armor, etc. The number of actions you can perform is limited, so when your actions are up, you have to go back to the missions menu in order to choose the next fight.

At the beginning of the game, the player will have to choose from the three houses the one he joins. Each house has its own different characters and scenarios. So, if the player finishes the game with a first house, he can remake the game with a different house in order to play with a new scenario.

Once the house is chosen, it is not possible to change your mind.

The game has several very complex mechanics. The game is therefore not recommended for neophytes.

Many fights between the main characters and hordes of monsters. Characters may get hurt, appear tired, or die. Effects of fire, ice, electricity and wind in some attacks.

When starting a game, the game will ask you for the difficulty level and the game mode.

There are 3 levels of difficulty : normal, difficult, and expert. Be careful when choosing a difficulty mode: you can increase the difficulty level when it’s too easy, but if it’s too difficult you can’t decrease it. It is also possible to practice fights in a separate mode.

The game uses a turn-based system. There are no button combinations to press at the same time, and the player can take all his time to enter the controls. However, the game sequences between fights require walking in an environment where you have to control the camera. Having to orient the camera with the right stick constantly can confuse people who are not used to 3D games.

All the language of combat, destruction, provocation, friendship, courage. Some references to alcohol consumption are present in some dialogues.

An extension can be purchased to play a new story. More details below.

The extension pass adds a lot of additional content. It allows you to explore the story of a fourth house that contains new characters. It also contains several new missions to complete.

This pass is completely optional. The game already has a pretty long lifespan so if you want to buy it, wait until you’ve completed the story of each of the three houses. It’s not worth buying if you haven’t finished the game.

There is only one mode, the main story.

Fire Emblem: Three Houses of strategy that really makes you think: where will I place this character? With which character will I attack the enemy? Which weapon is stronger against this monster? Etc. These are the kinds of questions you’ll need to ask yourself throughout the game. The fights are a lot of fun to do, they are reminiscent of a kind of puzzle that the player must solve in order to win the battle.

The story of the game is very developed. It will be necessary to complete the history of each of the houses in order to know the world of Fire Emblem: Three Houses. Starting the game again by choosing a different house is a lot of fun. Indeed, being able to play with new characters every time is pleasant, but a little redundant, especially since the characters are very stereotypical. Several female characters are sexualized (see the “positive message” section above), which is quite disappointing.

The game takes a very long time to complete, so if you want to take on the challenge, you’ll have to spend a lot of time on it. The mechanics of the game that must be learned by the player are very numerous and complex, so it will take a long time to get used to them.

Although the game is not recommended for neophytes, it offers a good experience for more experienced players.

More information about the game: Official page of the game on nintendo’s website