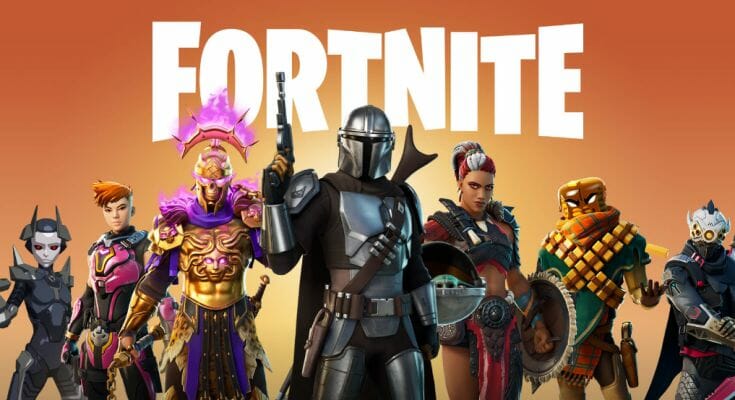 The Fortnite phenomenon invades all consoles, phones and computers! Choose your character and jump off a flying bus to land on a desert island where you will face 99 other players with all kinds of firearms. Who will emerge victorious? Everyone’s tricks and skills will be used to separate you.

In Save The World mode, it is possible to choose the difficulty because you face enemies controlled by the game.

In Battle Royale mode, it is not possible to choose the difficulty because you are facing enemies controlled by humans. So you can face players who are weaker or stronger than yourself and you never know who to fall on.

More details on the game modes below.

The characters shoot themselves with numerous firearms, swords and grenades. No blood. It’s all in a cartoon universe.

They fight monsters or other human characters controlled by other players, in remote or melee combat.

The battles are marked by frequent gunfire, explosions and cries of pain.

Developped enough. Suitable for children from the end of high school or more. Online players can use their microphones or chat. Anyone can communicate with anyone at any time. So we can hear swearing and insults.

The characters have all the colors, shapes and costumes. Some modes encourage team combat. However, the great danger comes from the possible communications between players.

There are cases of harassment between young players for any reason, or malicious people talking to children.

And when it’s not the game that does it, it’s going to be his friends and the players who are going to put social pressure on him to conform to the group.

The strategies of Epic Games (the developer and publisher of the game) to make young players spend money are very deceitful and thought with psychologists.

It is necessary to talk to your child before you allow them to play.

In addition there are TWO levels of parental controls to prevent untimely spending and abuse of language by other players:

If you would like more details about Fortnite’s Strategies for Spending, please see the link article.

The character can use weapons, objects, build buildings, move in an open world in 3 dimensions. This means that many buttons are used, and they must be used quickly to defeat opponents.

The game is free to download on each console, phone or computer.

It’s an action game in which players build forts, gather resources, build weapons and fight hordes of monsters in frantic battles. Players compete in two multiplayer game modes: Save the World and Battle Royale, all from a third-person perspective.

To play online, all you need is an internet connection on consoles, phones or computers. You don’t need a subscription.

Players use firearms, swords and grenades to fight hordes of monsters and defend territory

Definitely the mode that made the game so popular that it became a phenomenon. 1 player versus 100 online. Everybody against everyone.

Players compete in “last man standing” shootouts with other players on an island with decreasing borders.

Note that Playstation players can play with those of Nintendo Switch, those of Xbox Series … Etc.
Whichever machine your child plays, they can play with their friends online, even if they have a different machine.

Fortnite is a very good game, very well calibrated, and one of the most played games in the world with more than 125 million players. However, its business model is very aggressive and will convince many people to buy this or that costume or extensions. It is better to learn, to see to play before, to understand all the strategies of monetization and to circumvent them or explain them to his child.