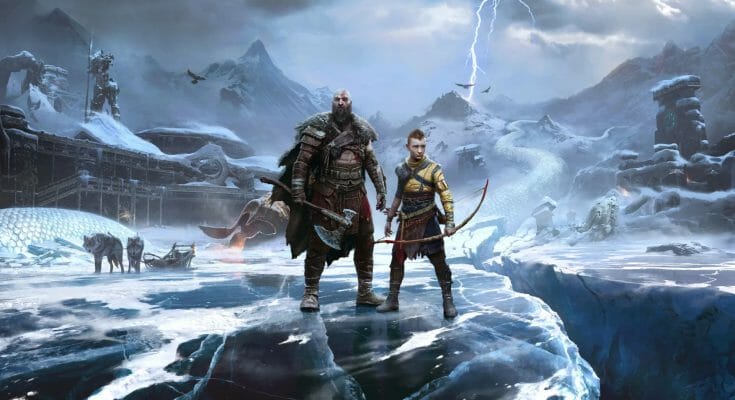 God of War Ragnarök is a narrative action game in which Kratos, the titular warrior god, is followed as he tries to protect his son Atreus as the end of the world from the Norse gods approaches.

To get there, you will have to explore the 9 kingdoms of Yggdrasil, solve puzzles and face mythical creatures and vengeful gods.

God of War Ragnarök is an action game leaving a large part to the story. In fact, we’d say God of War is to the video game world what the Avengers movies are to the cinema: big blockbusters brimming with action and memorable lines.

You play as Kratos, anciew of the Greek war, refugee in the Nordic kingdoms after his rage destroyed Olympus. He tries to accompany his son Atreus, on the verge of adolescence, when the latter discovers that he is Loki, and that prophecies reserve him an important role in the approaching apocalypse, Ragnarök.

The game is divided into two phases. First, you will have to explore the beautiful realms of Norse mythology, accompanied by memorable characters who chat with you during your travels. During these exploration phases, you will be invited to solve puzzles to progress, and explore every corner to find the many treasures hidden in the environment.

In the second phase, you will have to face various enemies, from regular monsters to mythological creatures without forgetting some Norse gods. You will then have to show quick reflexes in order to use all your arsenal to defeat these dangerous enemies.

Estimated total duration of the game: 20 to 40 hours to complete the main quest, 70 hours to unlock everything

Business model: Just need to buy the game once.

The game was provided by the publisher for review. It does not influence our opinion.

Violence is omnipresent and presented in a very graphic way. The creativity of Kratos, the main character, to dismember his enemies is second to none. This game can only be recommended to an informed audience.

All dialogues are dubbed. However, to understand the advantages of different weapons and armor, as well as to follow the tutorials, it is essential to know how to read.

Some characters use vulgar vocabulary. The vocabulary register goes from coarse to sustained register, depending on the interlocutors.

In this game, Kratos questions its nature, the usefulness of violence and the necessity of war. If ultimately, the game seeks to give a positive answer to these heavy questions, the game is full of characters who make bad decisions and pay dearly for them.

On a normal level, God of War Ragnarök is a rather difficult game, even for one. Experienced player. That being said, the game also offers many levels of difficulty, so a so-called “story” level where the difficulty of the fights is reduced to a minimum in order to allow less skillful players to enjoy the story without breaking their heads too much.

Again, at the normal level, God of War Ragnarök requires a rather high level of execution from the controller.

However, the title offers a plethora of accessibility options, whether for less experienced players or for those with certain motor limitations.

Great efforts have been made to make the title as accessible as possible.

The game is only played in local single-player, in story mode.

God of War Ragnarök is a mega-video game production, a very expensive production that offers only the best, both in terms of graphics, music, scenario and gameplay, which is refined to (almost) perfection.

The writing of this game deserves to be highlighted. The dialogues between the different characters allow us to get to know them in a natural way, while playing. We become attached to each of them, and we quickly identify with their moral dilemmas.

Moreover, the questions that Ragnarök addresses are relevant and delicate. It is about how best to maintain the bond that unites us with our child as he enters adolescence. We also deal with serious issues such as the necessity of war, our relationship to violence, determinism. Complex issues dealt with intelligently.

Visually, the game is stunning. The level of detail in the characters’ faces often makes us feel like we’re watching a movie. The emotions of the protagonists can be read by the subtle squinting of their eyelids or the subtle movement of the corner of their lips.

But it’s hard to make a good game if the action isn’t gripping, and again, Ragnarök triumphs. The combat system, without moving much away from its predecessor, adds a few elements (including a new enjoyable weapon to use) that make the action exciting. I spent a few hours trying again and again to defeat the same enemy because I enjoyed memorizing his attacks and trying to rise to the challenge.

All that being said, is God of War Ragnarök a kid-friendly game? Absolutely not.

Not only is the level of violence very high (even a game like Mortal Kombat, famous for its barrels of hemoglobin, struggles to compete with this level of violence), but the themes addressed are not likely to interest children. Are we doomed to follow our nature, or can we actually change and thus rewrite our destiny? Interesting questions, but not when you’re still in elementary school.

But if you have older teens who are mature enough to be confronted with this kind of game (or if you are curious yourself as parents), God of War Ragnarök is a tour de force that borders on perfection.