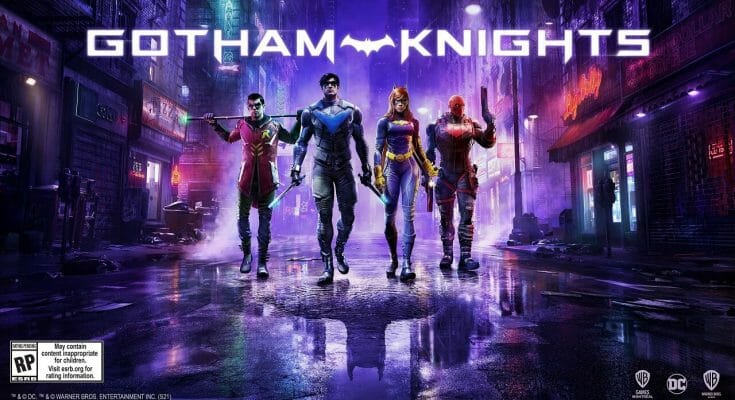 Gotham Knights is an action, 3D adventure game featuring the following 4 characters: Batgirl, Robin, Nightwing, Red Hood from the Batman universes of DC Comics. The game is playable with a single player, and we alternate between the protagonists as the adventure progresses.

You play as one of the 4 heroes mentioned above and you go to various places in the open world to defeat many enemies.

You can move around the huge city with a grappling hook to hang on to the different buildings or by motorcycle (batcycle) on the road.

To change characters, you have to go to the Belfry (pronounced Belfree) which is the headquarters of the 4 Gotham Knights and Alfred, Batman’s butler.

The game is composed of 4 phases:

Business model: Need to buy the game once.
Then it is possible to buy the characters, costumes, and other bonuses separately.

Game provided by the publisher for review. It does not influence our opinion.

Lots of reading for documenting attacks in particular.

Superheroes who save the city, but all problems are solved by fighting.

Requires a lot of execution to defeat some fights. A little difficult to handle for those who have never played. A good margin of progress to improve. Many advanced techniques will satisfy veterans. Requires moving in a 3D environment by moving the camera simultaneously. Many combinations of buttons for combat.

It is possible to buy characters, costumes, and other bonuses separately.

Since version 2.0 of the game released on December 13, 2022, the game is MUCH more enjoyable to play. Bugs are much rarer, the grappling hook clings to the right place, the fights are decent, the icons on the map remain displayed. Now, we can recommend the game to DC Comics and Batman fans, but at a low price… There are still many flaws listed below. It is mostly an action game, exploring the city with lots and lots of fights. It’s very repetitive, but it can be entertaining.

The acting is beautiful, very well animated, the voice actors or acting performance are very good. There are constantly plenty of light effects, rain, all at the same time. The work on this side is impressive.

Moreover, the game even drops below 30 frames per second during certain motorcycle phases.

Here’s a list of things that don’t work because there are far too many:

When you press a button, each character takes 1.2 whole seconds to complete his attack. It should be much less to have a better feeling of blow.

The impacts of the blows are very badly rendered. It doesn’t feel like you’re hitting anything. Only Robin has pretty decent stick shots, but still too long.

The shots are too repetitive and not interesting.

When you hit your opponent, your character will suddenly jump on another opponent for no reason.

The camera rotates randomly for no reason. And as soon as it turns, an enemy comes to hit you. You have to constantly reframe it to see the action. The 4 heroes are not different enough, nor interesting.

The characters are soft, not pleasant at all to control. It doesn’t feel like they live in the world, they float, get stuck in the walls. We do not feel the race, the walking of the characters, they do not seem anchored in the ground.

You will start the first battles of the game by facing 4-5 enemies, and suddenly your next fight will be against 30 enemies at once?! Bosses have 100 times more life than normal enemies. It makes boss fights way too long and laborious for nothing.

The city is huge, for nothing. It is empty. We move between cubes and straight cobblestones. We are asked to detect crimes with sonar. They appear and disappear after 3 seconds, there is no way to follow them again. If you’re lucky, you have to open the map and mark them on top to get there. The grappling hook is not pleasant, the animations are good but not fluid, neither fast, nor pleasant, nor well connected to each other.

The character takes THREE seconds to jump!! You have to hold the jump button to jump after a race. You remember the jumps in 1995 with Tomb Raider 1 on PC, Playstation 1. IT’S THE SAME.

When you aim with the grappling hook and you throw it, and well…. sometimes it doesn’t take you where you aimed !! It works 80% of the time, but to do the tests in limited time, you will rage on the precision.

You can get lost in town especially at the time of the tutorials and have NO indicator either on the radar or on the map, to know how to continue the game.

The buildings are empty inside, there is nothing to do except activate switches, open chests and defeat enemy generators. Their architectures are also based on cubes and straight pads.

Do I have to continue?

There is nothing that goes….

Looks like a demo of a future game. It’s nice to drive through the pretty city by motorbike, but it’s empty. It’s like exploring the free-to-play Matrix game that was demonstrating a game engine.

Investigations are useless, incomprehensible and slow down action.

When you are spotted in an infiltration phase, there is no way to hide and drop the alert unless you move away for miles, which is impossible indoors. Enemies will continue to follow you everywhere, like robots.

The online mode offers in theory to do the adventure with another person. When you choose to play with strangers does not offer to choose your partner, it is just random. So we come across anyone, we don’t know if they want to play or not, how they want to play.

Note that it is possible to play with a friend.

You have to unlock the online mode after a few hours of play.

It is difficult to select your mission, or to understand how to launch it. The game requires you to do a lot of unnecessary fights in the city, in a repetitive way to build experience. The operation of modules that improve costumes.

There’s too much stuff in this game! There’s even crafting! Crafting consists of collecting a lot of objects, in order to create another object. In this game, we create the costumes in this way. Why do we need crafting in a Batman game?

You lose various random crafting pieces when you die…

All the ingredients! They are just put in any way, in any direction. The ambition and scope of this project should have been greatly reduced.

I don’t understand why WB Games Montreal, which had so much trouble making a Batman game with one character, thought: “we’re going to make a game with FOUR characters, in a huge city, with an online mode”

More info about the game: Official website of the game

It is highly recommended that you play the games below instead.

The game is similar to the Spider-man superhero games and the Batman Arkham series games.