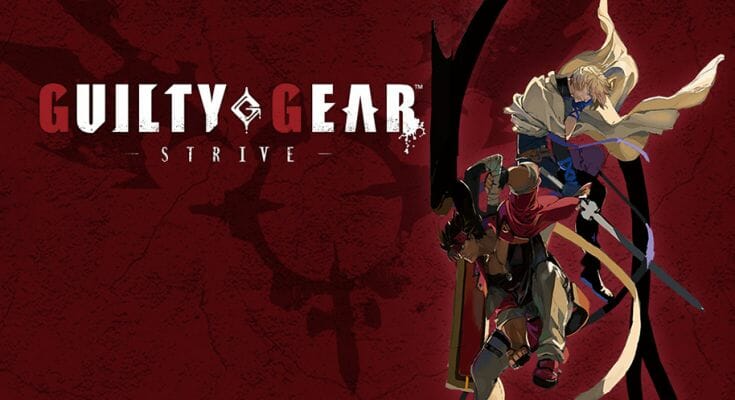 Guilty Gear Strive is a 2-dimensional fighting game featuring original and whimsical fighters in sumptuous environments. It is the heir to a long series of fighting games that debuted in 1998 for the Playstation 1. But rest assured, this episode is a return to basics and allows you to learn and approach the series starting with this one.

A fighting game with lots of punches and kicks. There are also many magical powers such as special powers of fire, ice, electricity and wind. The characters also have bladed weapons of any type such as swords, giant scalpels, chain fakes. Cries of pain and impacts can be heard during the beatings inflicted. Blood splashes can be observed. A non-interactive sequence shows a man whose torso and hand are impaled, with some splashes of blood.

Little dialogue in combat, with only provocations between fighters. On the other hand, the story mode is very convoluted, told by Japanese voices, subtitled in English. It’s literally like watching an Anime (Japanese cartoon) with the characters from the game.

Just fighting. The selection of characters is very varied. Fighters have all shapes and colors. Some female characters, however, wear very revealing necklines, have exaggerated breast towers, and effects where their chest is in motion. In addition, some camera angles focus on these breasts.

Many menus and textual explanations.

It is possible to buy different colors for the characters included in the game, buy digital illustration books, soundtracks….

And most importantly, the publisher has announced that the game will get additional paid characters in the future. This announcement took place long before the game’s release and this practice has unfortunately become standard in fighting games. It’s as if they’re keeping content already produced before the game launches, hostage behind an extra payment.

There is no need to have played other Guilty Gear games to enjoy this episode.

The Guilty Gear series has been a classic fighting game since 1998. The Strive episode is one of the best to date. The current version mainly enhances the online mode and makes it very efficient. This is essential for a demanding game.

This is 1 vs 1 vs 1 in 2d combat with various and varied fighters. These punches and kicks and make a whole bunch of special moves, sometimes with effects of fire, ice, wind, or electricity. 66 characters are selectable and come for the vast majority of previous episodes and other games of the publisher (SNK).

If the game is very playable to the controller, it is above all was thought for an arcade controller; as seen in the arcades, a lever and 5 large buttons. It is possible to set up shortcuts of combinations of buttons on the handler’s gachettes.

Arcade Mode: A Series of Fights Against the Computer

Mode Vs CPU: a fight against the computer of your choice

Survival Mode:an infinite series of fights against the computer, as long as you survive

Versus Mode: Fight Against Your Friend on the Same Console

Tutorial Mode: The basics of the game explained quickly so as not to lose players

Mission Mode: This mode explains the game in great detail in many missions. The most persevering will be rewarded with a lot of knowledge. Unfortunately, this may put off many people.

Story Mode: the whole story of Guilty Gear Strive told as if it were a Japanese cartoon, being dubbed in Japanese or English, and subtitled in English. There is no button to press, nor a fight. Everything happens automatically like a movie.

Lobby Mode: play as a small character in 2 dimensions and composed of pixels in hotel lobbies in order to find online players to face in battles. This is by far the most criticized mode of the game. On the one hand, because the majority of players have to pass for this to play online, and on the other hand because it is a great waste of time compared to what a menu would have brought.

The Guilty Gear Strive lobby has undergone multiple iterations. Lately, the ability to continue facing an opponent several times in a row, has decreased the intensity of criticism and the considerable loss of time spent in menus and loading times.

The development team seems to be listening to the players. We hope that she will find a solution that respects the players’ time soon.

QuickMatch: Wait for your next opponent online while training.

Even before the launch of the game, the publisher communicated about a plethora of optional additional content, and many editions of the game. If this sounds good in theory, in practice it gives this:

A table worthy of Excel… Why are there 5 different editions for a single game? Why so many different bonuses? This creates a lot of confusion for even the seasoned consumer and I think it does a disservice to the very good quality of the game. It is also a table for a single console: the Playstation 5. There are 2 other tables that I would spare you, one for the Steam PC version and one for the Playstation 4.

I recommend, if the game seems to please you, to buy the simplest version possible: digital or physical. And buy the extensions then, or possibly wait for their price drops.

Unfortunately it is still too elitist and quite difficult to handle for beginners.

Those who linger to train and improve will be rewarded with maneuverability, fabulous character selection and sumptuous graphics. They will take great pleasure from it. Unfortunately, this requires perseverance.