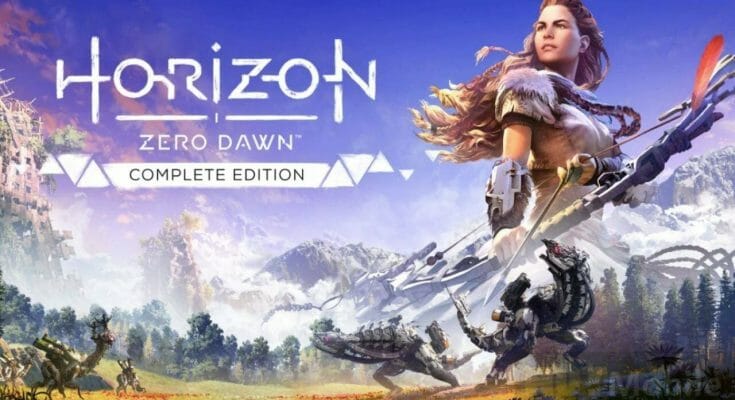 Horizon Zero Dawn takes place in the distant post-apocalyptic future. Human civilization has collapsed to make way for a society dominated by robotic creatures. We play the character of Aloy, an orphaned human and skilful hunter, in search of answers about her origins. Aloy sets out to defend his tribes against “robot animals.” As this journey progresses, Aloy learns more and more about the collapse of the old world.

Horizon Zero Dawn has a lot of side quests which can cause you to accumulate several hours of games. The world is huge and very immersive. The colorful landscapes are beautiful and varied. When you travel, it’s nice to walk around and be able to contemplate the world around you. You can also play the game with a higher level of difficulty once the game is complete.

It will take perseverance to get to the end of the adventure, even if you can choose the level of difficulty.

Dialogues may contain swear words as well as allusions to drugs and sex.

The colors and graphics of the game are sublime. Nature has regained its rights and many landscapes are open to us. Aloy, a very endearing young female hunter, embodies a resourceful, charismatic and courageous female character.

Horizon Zero Dawn leads us to ask questions about the future of our societies and civilizations, the development of technologies or the preservation of the environment.

The game uses a level of familiar language. However, you must have the ability to read for several years if you choose to play in the original version with the subtitles.

An additional extension is available for purchase. It is included in the “Complete Edition” of the game however.

The buttons to use will remind you depending on the difficulty mode chosen. However, you have to know a minimum of the controller to hope to win the fights.

The game is an open world, it means that you have the opportunity to roam freely the virtual world in which you are. Nothing will stop you from going where you want to go whenever you want. Your main enemies are the “robot animals” (or machines).

You play as Aloy’s character, in search of truth, who sets out to harm the world to understand why she and her mother were banished from the Noras tribes. During his quest, Aloy will be led to fight against robotic creatures but also to help other tribes. The more the story progresses, the more she learns about her mother and the old world.

The game doesn’t have a local game mode, just one mode where you go through the story. There is no mode where you share the screen. The game requires a certain skill in the field of video games in order to play it.

An extension entitled The Frozen Wilds was released on November 7, 2017. You don’t have to finish the game to start the expansion, however level 30 is required.

(The extension is included in the “Complete Edition” version of the game.)

Horizon Zero Dawn is a critically acclaimed adventure game for years. Players enjoyed exploring a futuristic world alongside Aloy and these multiple combat skills. A must-have for the Playstation 4 console, a sequel to which is already planned.

View all posts by Laure Boyer →