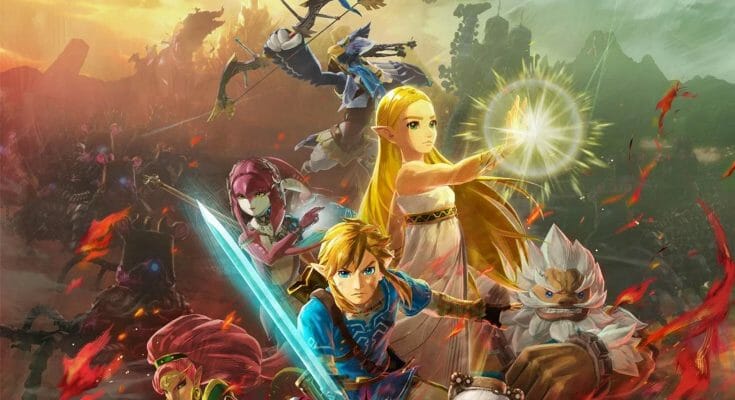 In Hyrule Warriors Age of Calamity, play as the character from the Zelda Breath of the Wild universe of your choice and battle hordes of enemies and monsters.

Lots of content, enough to take care of many hours and build the characters into experience.

Many difficulty modes. You can adapt the game to your needs.

Many fights between the main characters and hordes of monsters. Characters can get hurt, look tired or die. Effects of fire, ice, electricity and winds in some attacks.

All the language of combat, destruction, provocation, friendship, courage.

The female and male characters fight on equal terms.

For now, the game pays off on acquisition, but the publisher is used to offering multiple extensions (DLC) to these games after release.

Easy to play. We direct the character, and we hit by pressing the buttons several times.
However, having to steer the camera with the right stick constantly, can confuse people not accustomed to 3D games.

Find the whole universe of “Legend of Zelda: Breath of the Wild” in this game that explains the beginning of the story. For a game focused on combat, it offers a very extensive story.

It’s just a matter of fighting enemies and following the on-screen instructions. It’s a good romp with a very neat artistic direction, taking up the graphics, characters and enemies of “Legend of Zelda: Breath of the Wild”.

There is a cooperative game mode that divides the screen into two, for both players.

It can be turned on or off at will at any time on the map during the main story. You can accompany your child and guide them through the levels.

It’s a great game to pass the time and relax. No puzzles, no puzzles, just combat. We press many times on the same buttons.

The game is of course much nicer when played at 2.

There are many slowdowns during the game because of the amount of enemies the console has to display and its poor performance. There are also problems with the camera, where it will be in the wrong place during some cases, when you are cornered against the wall. Finally the game is very repetitive, you will face the same enemies thousands of times and the same bosses dozens of times. After a while, you’ll saturate, so it’s better to enjoy this game in small sessions.

Although Hyrule Warriors Age of Calamity are known as the “Hyrule Warriors Definitive Version” (shown below), it is totally independent of it and does not require playing the previous one to be appreciated.

On the other hand, if you’ve played Zelda Breath of the Wild, you’ll enjoy finding the story and characters in a new game. Again, it’s not necessary to play either. 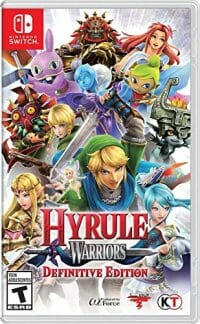