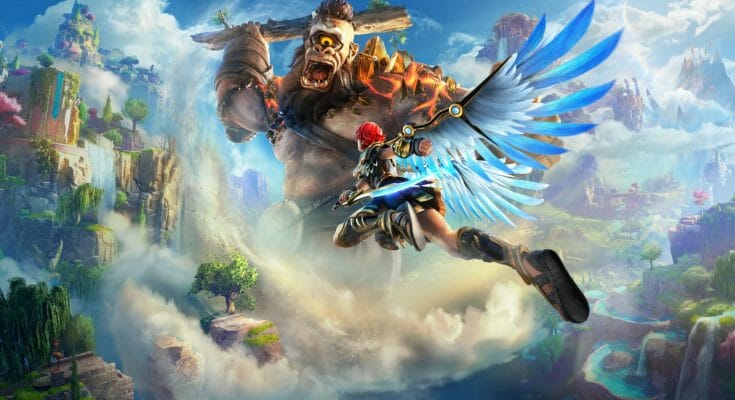 Play as Fenyx, a demigod who will be looking to save the gods from Typhoon’s grip. In this brand new game created by Ubisoft, you travel the mythological world of Greece while arming yourself to prove your bravery as a hero of the gods in a legend that will be narrated by Prometheus. In Immortals Fenyx Rising, you create your own legend.

The game has several difficulty modes, allowing the player to relive the adventure several times to different degrees of difficulty. So it’s playing very well again.

The game includes a tutorial allowing the player to quickly understand the various controls that the game entails.

The game features fantastic violence without much bloodshed. On the other hand, there are more or less violent themes that refer directly to Greek mythology and violence. Characters sometimes have a level of coarse language, but the game is not graphic in terms of violence. This is a perfect game for teenagers who want to discover Greece.

Language is sometimes sustained and sometimes coarse as well.

The game shows young teenagers who are interested in Greek culture and mythology a slightly less violent version, without being too censored of Greece. It’s very rewarding as a culture and learning it through video games without the extraordinary violence it can contain, is very interesting.

You have to have an understanding of reading at the beginning of high school in order to understand the game and its different menus.

There is an online store that allows you to buy items that make your character stronger, and optional extensions that can be purchased separately.

The game is action type, so there are not many commands to remember in order to play this game. However, it is necessary to learn or know how to move the camera in a 3D environment.

Embark on a brand new adventure presented by Ubisoft that will immerse you in Greek myths. Play as a personalised hero and you’ll quickly be drawn into an unforgettable epic adventure. Find the artifacts that will be put in your way in your quest to save the gods and meet legendary characters who will leave a mark on your adventure. Olympus is waiting for you!

Just one mode where you go through history. You can’t play with a split screen with your child, but you can guide your child to find clues that will allow them to advance their quest.

There are a few extensions to the game’s main quest in the “Season Pass” that add a few more missions to your story that will be released in the months following the game’s release. The first is called “A New God” which will allow you to prove yourself in Olympus. The second is called “Myths of the Eastern Realm” which is based on Chinese mythology and the last one is called “The Lost Gods” which will allow you to reunite with a new hero, Ash.

This title is a very educational game for young people about Greek mythology. It removes the violence of the God of War series and is more akin to the younger side of The Legend of Zelda: Breath of the Wild. It allows young people to live a legendary adventure, without too much violence, but without losing the pleasure. Recommended for all fans of mythological and action games.