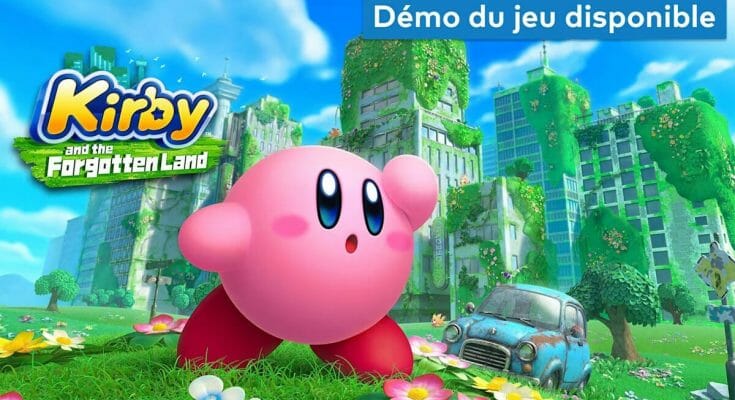 Float in a brand new adventure as Kirby, the Pink Ball. Explore 3D levels as you discover a mysterious world filled with abandoned buildings from an ancient civilization… like a shopping mall?! Copy enemy powers such as Drill and Explorer and use them to attack and explore around, and save the Waddle Dees from the fierce packs of beasts alongside the mysterious Elfilin. Hope you are hungry for an unforgettable adventure!

In France, the game is named “Kirby and the Forgotten World”.

Buy the game in digital format on Humble Bundle.

The game has a progressive difficulty but it is not very complicated, when you understand the rules. There are 2 levels of difficulty, intended for neophytes and experienced people. This should make it possible to encompass a good part of the players. Even the “Difficult” mode is not much.

Some people have difficulty with boss fights.

What the ESRB does not find appropriate for children under the age of 10 is that the characters compete with swords, projectiles, pistols, cannons, magic, spears… Kirby can swallow and ingest these enemies, he can also spit them out on other enemies.

There are visual effects of fire, ice, electricity, or impact of blows as animation and that’s it. Everything you can see in a cartoon.

Also you should know that some enemies especially towards the end of the game can be scary for the youngest.

You have to know how to read in French or English for several years to understand the instructions and action verbs.

The theme of the game is adventure and the discovery of an ancient world. Kirby must defeat his enemies in order to return to his world. The game is also playable in cooperation which allows you to accompany your child in the adventure or that he accompanies you.

It’s just a matter of directing a character to top in 3 dimensions and choosing the menus you want. There is no camera movement by players. It is automatic depending on Kirby’s position. Some passages require good coordination of the fingers at the controller and good reflexes. A little patience and perseverance should be able to overcome this.

You play as Kirby the pink ball-shaped character who has feet and arms. Kirby has the ability to walk, jump, float in the air (just seconds in this episode), slide, block attacks and dodge. Of course his main ability is back: absorb and swallow or spit out his enemies. When he absorbs certain enemies, he then gains their powers, allowing to acquire skills of fire, ice, bomb, pistol shooting …. Naturally each of the powers has properties in its own right and will sometimes unlock passages and secrets.

In this episode, the great novelty is that Kirby can swallow huge everyday objects that trans… morph suddenly in this object. For example, he swallows a car, he can suddenly control the car. He swallows a cone of circulation… he can move with it while hitting the ground. He swallows an arch from a garden, he can suddenly hover over time for a moment and progress to another part of the level.

These transformations are humorous pretexts to distort Kirby and offer variety in the levels. And it works well. If at first, the distortions are a little destabilizing for the veterans of the series, it brings enough originality not to tire the player.

Kirby travels through many levels divided into 6 thematic worlds. Like Donkey Kong Country Tropical Freeze, each level is like an amusement park. They are very detailed, very different from each other and you never know what to expect.

True to Nintendo, here the concept of one idea per level is taken up. Each level will first present safe ways to experiment with an idea, then progress in difficulty until the end of the level.

To keep players tired, the game also offers tests of the skills you have acquired in the form of Treasure Road and escapades in a city that you rebuild as the adventure progresses by delivering the Waddle Dee from the clutches of enemies.

Indeed, in each level, the player has the opportunity to complete missions in order to deliver the Waddle Dee. It’s about exploring the levels from top to bottom to find the multiple secrets that hide the little imprisoned creatures. While some missions are obvious, most of them will unlock as you progress, others will require you to repeat the levels multiple times. Every time you finish the level, the game shows you the next mission you didn’t complete in the game.

Unfortunately, there is no way to start again at a checkpoint one level easily. There are no menus for this. And Kirby can take a lot of damage from having to start over. When he loses, he loses only 100 coins. There is no system of lives.

Some levels take 10 minutes to complete, so it becomes tedious to repeat them several times.

A single game mode in which you can go through the story.

It is possible to play 2 players at any time. The second player then embodies Bandana Waddle Dee, a small character with spears, which he can project on enemies. He can also move, jump and float like Kirby but the similarities stop there. Indeed, he cannot swallow opponents and therefore use their skills. The second player is therefore a constant support to the first player, the main player. The camera follows Kirby constantly, everything is done and calculated for Kirby. Bandana Waddle Dee gets teleported when she’s out of frame.

A second player then not necessarily interesting in the context of a cooperative game but which can be fun to help the first player if he has trouble, or just accompany the first player who guides the action.

Note that there are no experimental mini-games in this game unlike the previous episodes.

When it is a figurine outside the Kirby universe, it is the same thing, except that the object earned is no longer storable but consumable immediately, as a revival of life. Ideal when facing a difficult passage.

The player can use 5 Amiibo minifigures per level, and this countdown is reset when he completes it.

The figurines are here totally optional, and dispensable. There is no need to buy a figurine for $ 16 + taxes or $ 22 + taxes for this video game.

A few weeks ago after testing the demo, I wanted to write the following title: “Kirby and The Forgotten Land is not for me, and it’s very good like that.” Indeed, the very easy and child-friendly orientation of the last episodes and the demo, made me draw a line under a series that I love but which was no longer intended for me as a veteran.

WELL, I was completely wrong. Kirby and The Forgotten Land is fabulous. The whole experience is enjoyable, very well calculated from start to finish. It offers challenges for everyone. There is very little or no friction preventing you from enjoying the game.

Thanks to the 2 levels of difficulty, everyone can find his account.

The game is very beautiful, very detailed. It helps for jumps, to aim in 3D. The camera always sits in the right place. There is a lot of content. Really, I don’t have much to complain about, other than the fact that some missions are tedious.

You can get it without any problem, parents and children can find pleasure in it.

We recommend testing the demo available on the Nintendo Switch console eShop or on the game’s official website.

Buy the game in digital format on Humble Bundle.