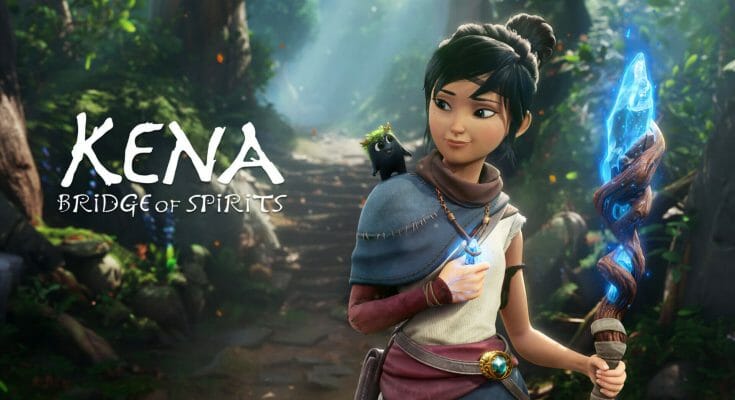 Kena is a spiritual guide whose mission is to guide the souls of the deceased to the afterlife. This premise may seem very strange, but the fact remains that Kena is a very endearing character who only wants to help those around her. You will be led to fight enemies and explore a valley that is filled with secrets, caves and treasures. Your quest will also lead you to look for the Rots, cute creatures like you’ve never seen them before.

There are 4 several difficulties, ranging from the lowest where the game is easier and allows a focus on the story, to the most difficult where the enemies are very difficult to defeat.

The game tackles the theme of spirits, ghosts, and death (albeit in a rather gentle way). Kena must fight against evil creatures. These creatures will want to directly attack Kena in order to defeat her, but all the violence is more like cartoons. However, Kena will scream in pain when she is hit by an enemy.

The game is not recommended for young children.

No problem, the language is very light.

Kena will help some characters who are in need out of pure altruism.

Very few texts to read outside of the dialogues, where they are spoken in English only (with French subtitles).

Requires use of all buttons on the controller. The 3D camera can be complex to handle for people who are not used to navigating a 3D environment. The player needs good reflexes in order to fight enemies.

You play as Kena who aims to free a village from the corruption that is there. For this, she will have to defeat several enemies and bosses.

There are two important elements in the game: exploration and combat.

Kena finds herself in a world that unfolds gradually, in a more linear way. It is always possible to retrace your steps in order to discover new secrets. She will explore caves, forests, plains, etc. An important part of the exploration involves discovering Rots, extremely cute creatures, which increase Kena’s attack power. She will also find some skills that will allow her to explore more places that were initially impossible to reach.

Here are some additions that are available for free as of September 27, 2022:

Kena: Bridge of Spirit is eerily reminiscent of a Pixar movie, with its expressive characters and colorful environments. The game conveys a beautiful message of mutual aid and empathy. Moreover, you will experience several emotions throughout your adventure. Although the game is short, the entire adventure is a particularly pleasant experience to live. This game is not recommended for young children, especially because of the theme of death that is addressed in the game. Also, some sequences of the game can be scary because of the ghosts and monsters that are found there.

More information about the game: