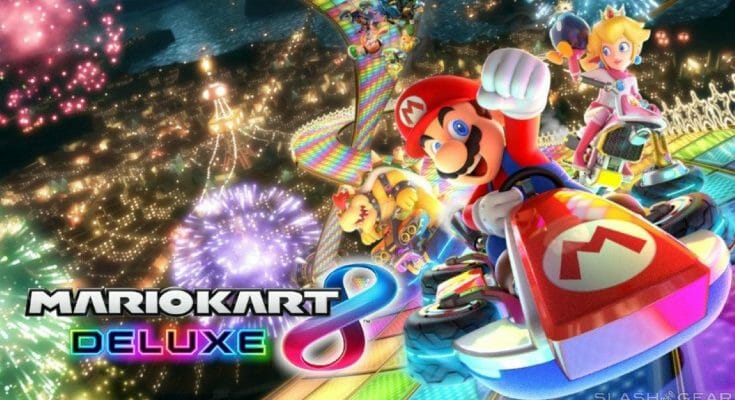 Control Mario, his friends or enemies and take on everyone in many frenzied karting races in Mario Kart 8 Deluxe.

Infinite game, as long as you want to improve or compete against opponents.

Just racing, there is no story mode, and not much text.

The child can be guided in very simple menus. Most of them are icons that help you navigate.

Very easy to drive, accelerate, brake, left and right. Acceleration can be switched to automatic mode to make it easier to drive (Smart Steering). Another help can be activated to avoid getting off the track.

The player chooses his character (among 42 characters from the universe of Mario, Zelda, Animal Crossing), the components of his Kart and his circuit (among 48). He then faces human or console-controlled opponents in order to finish first in the race.

He can also perform battles in which he must use bonuses to break the balloons that float over the opponents. More details below.

Doing 4 races in a row with opponents, the winner is the one who has accumulated the best places on the 4 circuits.

Fashion against the clock:

Either races or battles.

There are 5 battle modes that all take place in arenas (8 arenas available):

Requires a Nintendo Switch Online subscription to play on the Internet with friends or others.

Online, as well as locally, players can take on strangers or friends in randomly selected circuits. Game modes are Race or Battle in the Arena.

Mario Kart 8 Deluxe is an excellent game, a must-have for the console. It can be recommended to everyone without a problem. It has sold more than 20 million units. Driving aids can be activated at will and help newcomers get by.