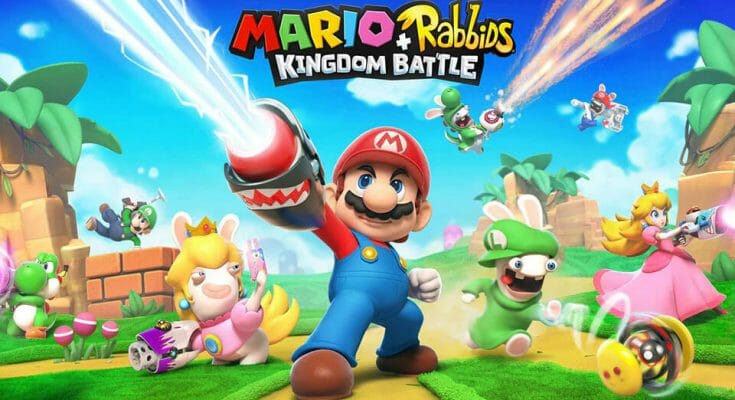 Mario + The Rabbids: Kingdom Battle is a turn-based strategy game in which the universes of Super Mario and Rabbids are mixed. The protagonists of these universes must join forces to defeat the threat hanging over the new kingdom.

Mario + The Rabbids: Kingdom Battle is a turn-based strategy game that requires a good dose of thought. Enemies are powerful, and the uses of our characters’ abilities are limited. We must therefore take the time to think about our strategy, and it will not be uncommon to have to repeat a level several times before finding a winning strategy.

The characters of the game use firearms to fight, but the latter project lasers or luminous projectiles, and the violence is therefore very cartoonish and funny. Rabbids have a bit of a crude humor (they appreciate toilet humor), but nothing very shocking.

The vocabulary used is simple and suitable for a young audience.

Mario and his gang, as usual, act heroically, keen to protect the innocent at every turn. They are assisted by rabbids, who also act in a noble way (at least, those who ally themselves with Mario), but they nevertheless have a somewhat crude humor.

It is better to have a minimal reading level to enjoy the story and interact with the interface during battles, but the level of reading difficulty is rather low.

There’s downloadable content (called Donkey Kong Adventure) for players who want even more, but the base title already offers generous content, and that additional content is optional.

As the battles take place on a turn-based basis, the player has full time to enter his commands at his own pace. It may take a modicum of dexterity to solve puzzles between fights, but in general, Mario + The Rabbids doesn’t require great dexterity on the controller.

In Mario + The Rabbids: Kingdom Battle, the universes of Ubisoft’s Rabbids and Super Mario find themselves mixed, creating a new colorful realm.

However, the enemies of our heroes are also propelled into this realm, and they get in their way.

The player will have to face these enemies in turn-based strategy battles seen from above. Heroes can be moved around the map (some fighters may move further than others) in order to defeat enemies while minimizing damage. To achieve this, we can for example hide our characters behind walls, or use certain attacks to reduce the accuracy of enemy fire.

Combatants also have their own capabilities that will have to be taken advantage of; some characters can give life points back to their allies, while others can use remote control bombs.

Each of the characters also has their own weapons that will be more or less effective depending on the circumstances; the shotgun will cause more damage at short ranges, but will be very inaccurate at long ranges, while the opposite is true for the sniper rifle.

A world to explore and unravel

In between battles, Mario and his troop must explore this mysterious new realm. Players who take the time to explore will be rewarded with pennies that allow them to buy new weapons.

The player will also find several puzzles that will block his progress (or optional puzzles that offer pennies). It will then be necessary to solve these puzzles to continue, most often by pushing blocks.

These little puzzles allow you to vary the experience and make the games more fun.

Players can play solo, or complete special missions designed to be played in simultaneous co-op.

Released a year after the release of the original game, this expansion offers us to explore a region of the world that mixes this time the tropical universe of Donkey Kong with that of the Rabbids. Players find Rabbit Peach, in addition to the arrival of two new characters, Donkey Kong and Rabbit Cranky.

A season pass, at a cost of $29.99 CAD or $19.99, includes Donkey Kong Adventure, a special steampunk weapon for each of the 8 playable characters as well as a few additional co-op cards. The Gold version also includes all this content.

The expansion is not necessary, it is primarily aimed at those who have completed the main game and are thirsty for more levels. It is also interesting to note that Ubisoft very regularly offers significant discounts on this game as well as on the Gold version. If you show a little patience, you will probably be able to get the game at a much better price.

If the idea of mario wielding a gun and sharing the stage with the vulgar Rabbids aroused surprise and skepticism when the game was announced, it must be admitted that Mario + The Rabbids: Kingdom Battle was able to confuse skeptics.

The strategy game turned out to be very refined, offering a lot of depth, and a reasonable challenge, to strategy enthusiasts. What’s more, the universe of the two franchises has been married with care, and the humor hits the mark, even for those who are not fans of the noisy humor of rabbits.

That being said, it should still be noted that Mario + The Rabbids: Kingdom Battle is not an easy game. If your child is attracted to these well-known characters and colorful visuals, but handles defeat and frustration poorly, it’s a safe bet that they might come out disappointed with the experience.

But children who know how to show perseverance and strategy will be rewarded with a memorable experience, beautiful, colorful and funny cutscenes, and a game that rewards effort and reflection.

We can not recommend this game enough to fans of strategy and characters of both franchises, especially since the title is often discounted and offered at ridiculous prices.

The game system of Mario + The Rabbids; Kingdom Battle is largely inspired by the Xcom series, a classic of the genre.

Fans will find a similar experience, but much more adult and violent. This is our warning: Xcom 2 is a great title, but it is reserved for teenagers and adults.