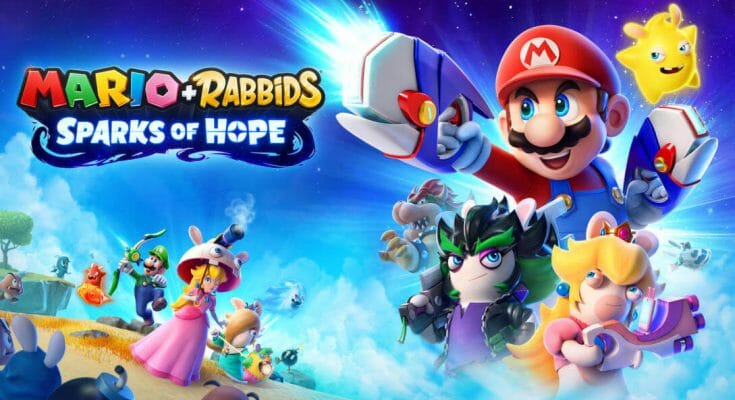 Mario + The Rabbids: Sparks of Hope is a turn-based strategy game that requires a good dose of thought. Enemies are powerful, and the uses of our characters’ abilities are limited. We must therefore take the time to think about our strategy, and it will not be uncommon to have to repeat a level several times before finding a winning strategy.

The characters of the game use firearms to fight, but the latter project lasers or luminous projectiles, and the violence is therefore very cartoonish and funny. Rabbids have a bit of a crude humor (they appreciate toilet humor), but nothing very shocking.

The vocabulary used is simple and suitable for a young audience.

Mario and his gang, as usual, act heroically, keen to protect the innocent at every turn. They are assisted by rabbids, who also act in a noble way (at least, those who ally themselves with Mario), but they nevertheless have a somewhat crude humor.

It is better to have a minimal reading level to enjoy the story and interact with the interface during battles, but the level of reading difficulty is rather low.

Ubisoft have confirmed that the title will come with a season pass at a cost of $39.99 CAD or €29.99, which will offer additional weapons as well as an additional scenario to be confirmed.

As the battles take place on a turn-based basis, the player has full time to enter his commands at his own pace. However, it will take a minimum of dexterity to solve puzzles and exploration challenges between battles. But in general, Mario + The Rabbids: Sparks of Hope doesn’t require great dexterity on the controller.

In all likelihood, the game system should largely resemble the one found in the first episode, Mario + The Rabbids: Kingdom Battle.

However, the protagonists will have to explore space this time, and it seems that the game borrows a lot of visual elements (as well as a few characters) from Super Mario Galaxy, released on the Wii in 2007.

We will have to defeat the enemies who try to prevent our heroes from saving the Sparks, creatures born from the fusion between the Lumas and the Rabbids.

The player will have to face these enemies in turn-based strategy battles seen from above. Heroes can be moved around the map (some fighters may move further than others) in order to defeat enemies while minimizing damage. To achieve this, we can for example hide our characters behind walls, or use certain attacks to reduce the accuracy of enemy fire.

Combatants also have their own capabilities that will have to be taken advantage of; some characters can give life points back to their allies, while others can use remote control bombs.

Each of the characters also has their own weapons that will be more or less effective depending on the circumstances; the shotgun will cause more damage at short ranges, but will be very inaccurate at long ranges, while the opposite is true for the sniper rifle.

We also expect Mario + The Rabbids: Sparks of Hope to once again offer us puzzles to solve between fights. There also seem to be small more reflex-oriented exploration challenges.