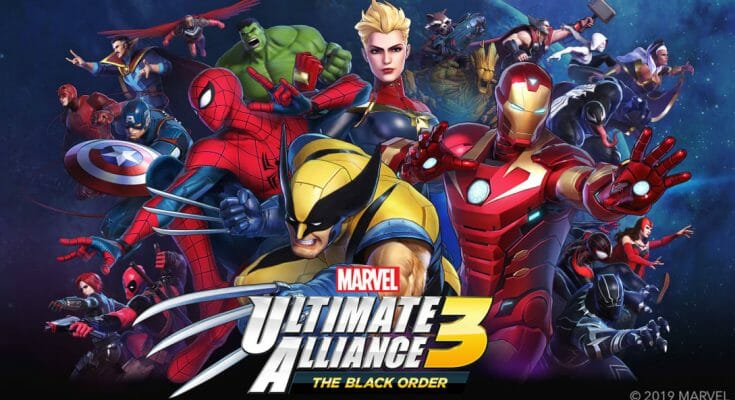 Choose your 4 favorite fighters from the Marvel universe and battle hordes and hordes of enemies. Marvel Ultimate Alliance 3 offers to cross various levels of Daredevil, Avengers, Luke Cage, X-men, Fantastic 4 and fight their respective antagonists between 1 and 4 players simultaneously.

A character appears with blood on his apron. A battlefield contains a large occult symbol that appears to be painted with blood.

Some images in the gallery have characters in costumes highlighting their chest, or buttocks. Some of the characters are in tight suits.

A lot of texts, all over the place.

You don’t have to have played the previous Marvel Ultimate Alliance to enjoy this game.

Choose your favorite Marvel hero and advance through the levels by hitting all enemies to advance.

Main Story Mode: Follow the progress of heroes in their quests to defeat the bad guys. From 1 to 4 players.

Infinity Mode: Many challenges with unique conditions of success in levels drawn from story mode. For a player.

Co-op: Join friends or strangers online to browse the levels with them. 1 player per console.

Now sold together only, on the Nintendo Eshop, the 3 extensions are:

Rise of the Phoenix: To unlock and play with new characters from the X-Men, and follow an annex story featuring them.

Shadow of Doom: To unlock and play with new characters from the Fantastic 4,and follow an annex story featuring them.

Curse of the Vampire: To unlock and play with new characters from Blade, and follow an ancillary story featuring them.

Marvel Ultimate Alliance 3: The Black Order is a cluttered game, but also enjoyable, entertaining and relaxing. Players help each other and play as their favorite characters. The realization of the title is not really up to scratch but it does not matter. It’s a popcorn game to change your mind like Marvel movies are.