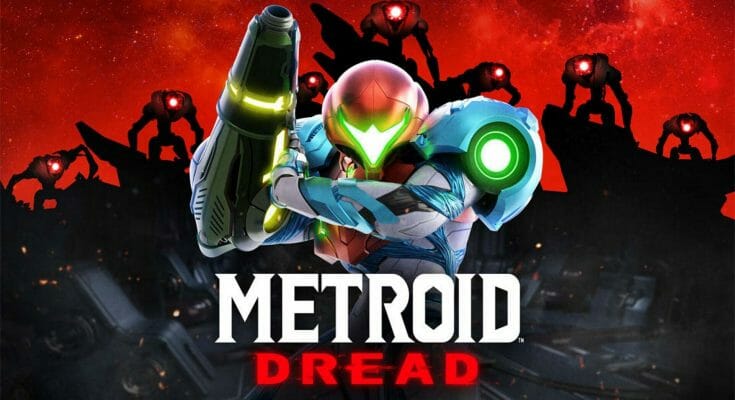 The brand new installment in the Metroid series follows the story of Metroid Fusion (released 19 years ago on the Game Boy Advance). Metroid Dread takes the form of a 2D platform game that focuses on exploration and combat. Players take on the role of the heroine Samus Aran, who can jump, shoot projectiles at monsters using the many skills that her robotic armor allows her. She will also have to explore the planet ZDR, in order to find an exit.

This game is quite difficult to play. Enemies have all their attack patterns that you need to know in order to defeat them. You have to have good reflexes since the enemies are fast.

This game is not very violent. It features fantastic and animated violence that is not very graphic. Enemies are sometimes scary, but have a lot of colors that make them less terrible.

Some particular enemies, the E.M.M.I (pronounced as the first name “Émi”), will pursue Samus relentlessly in certain particular areas. Moments of confrontation with E.M.M.Is are very stressful. Several bosses are pretty scary. Samus must use physical violence and projectiles in order to defeat the enemies.

There is no vulgar language in the game. Some dialogues refer to a war between aliens.

Samus is a woman who does not need to be saved, she is quite capable of defending herself. She fights against very powerful enemies on her own, while showing confidence.

Requires to know how to read for a few years, because the universe is a little complex and difficult to follow at times. Each new skill involves reading a tutorial of a few lines.

None. There have been a few free updates only.

All the buttons of the controllers are used, require good coordination and good reflexes. Luckily, there’s no 3D camera to control, the game always stays in sight from the side.

It is not necessary to have played the previous installments of the series to play Metroid Dread.

Metroid Dread takes place on the planet ZDR. The game is played with a view to the side. Samus walks across the planet ZDR in levels that are all interconnected with each other.

Samus finds himself at the bottom of a cave beneath the surface of the planet ZDR. His main objective is to escape from the planet by joining his ship that is on the surface. For this, she will have to navigate through the many caves by eliminating enemies and exploring the planet. At the beginning of the game, Samus loses all his skills, and must find them in order to join his ship. Each skill allows Samus to get closer to his goal.

Samus finds himself at the bottom of the planet ZDR and must find his ship on the surface.

The player tries to defeat all the bosses in the game one after the other.

Unlocks only when the player has completed the game once with the difficulty “Terror”. Samus tries to defeat all the bosses in the game one after the other, but if she gets hit once by a boss, she has to start over from the beginning. Recommended only for Veterans.

Metroid Dread was a highly anticipated installment of the series by fans. The word Dread, meaning “terror” in English, takes its place in the title, because at certain moments of the game, the player is placed in my rather stressful situations. While teenagers or adults might experience these moments as a challenge, younger children might be afraid of E.M.M.I.s. The Novice mode therefore takes on its full importance. Although the game is quite short, the exploration and combat are very pleasant.