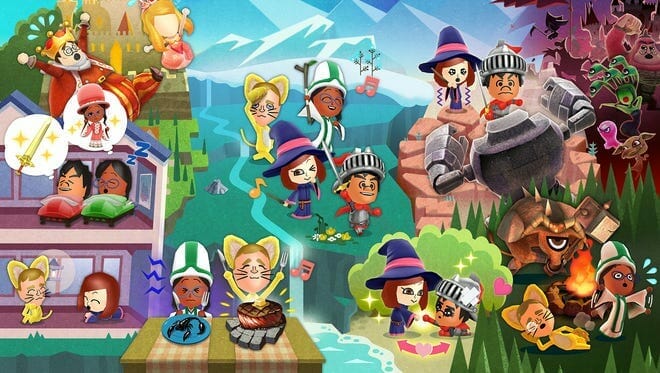 Relive a Nintendo classic released on the 3DS, now available on the Switch. Miitopia is a role-playing game whose protagonist will face the Evil Lord in this fantastic adventure. With the companions you make along the way and the various items you find, go on a quest to stop the villain who steals faces from the King and Princess in the world of the Mii.

The violence is fantastic in this game. There is no blood, but shards and characters are inviting, even fun.

Childish language largely with raw humour and a somewhat raw language as well.

It can be a good game that can introduce children to role-playing style.

There is an extension called “Out of Otherworld” that adds a few more quests and a few more enemies.

The game is played well for lovers of the style, but requires a little training for young players. It is not too difficult to move or fight.

Miitopia is a role-playing game that first came out on 3DS in 2017 and was released on the Switch in May 2021. You can embody your Mii in various classes, such as a warrior, a thief, a healer, a Pop Star, a Mage or a leader.

A Mii is an avatar that is customizable. It can be used at the end of Nintendo profile creation and it can be used in various games. It is available on various Nintendo consoles from the Wii U and 3DS.

Your Mii arrives at the village of Greenhorn and will be attacked by the wicked lord. He is a face thief and uses it to control peaceful creatures. It will also steal the face of the King and Princess and your Mii will go on a quest to stop it. Your Mii will live many adventures in this classic game made for Nintendo Mii.

This little adventure game is perfect for young people. It is good for stimulating children to solve puzzles and advance in various levels. There are a few controls to learn to attack, but the levels can resolve very well.

The world of role-playing is huge and can sometimes be limiting for young children. Miitopia introduces good style for young people and is cute for the not so young. It allows to understand the class system while keeping a certain touch of humor in the game.