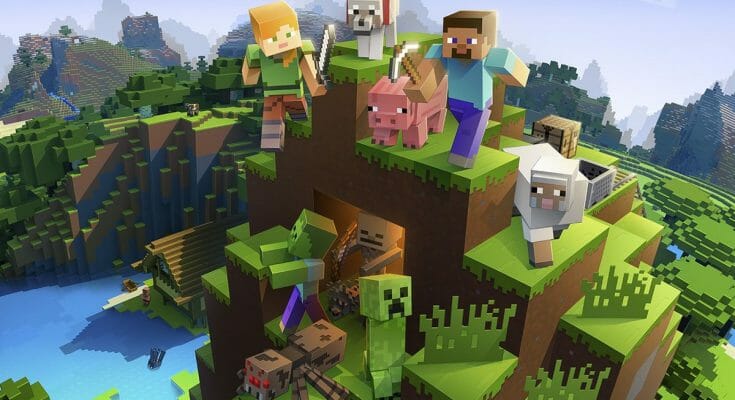 Create the world of your dreams or nightmares with millions of blocks! In Minecraft, you decide how the world structures itself, what elements go to where, and you invite your friends to play together. You can also participate in survival mode, which requires you to accumulate resources during the day to protect yourself from zombies after dark.

The game is virtually infinite, as long as the player wants to create, share his creations and enjoy the creations of others.

Players face monsters in many battles with shovels, swords and pickaxes. No blood. When monsters lose, they’re knocked out. Everything is made up of square blocks.

Very little text and instruction. The player is mostly left to his own devices.

Players, monsters and levels have all shapes and colors. They are made up of blocks.

Very little text and instruction. The child may need to be guided through the menus to find their way around.

It is possible to buy extensions called to extend the adventure. It’s optional though.

Learning to explore a 3D world takes a little time. The rest is easy.

In Minecraft, you decide how the world structures itself, what elements go to where, and you invite your friends to play together. You can also participate in survival mode, which requires you to accumulate resources during the day to protect yourself from zombies after dark. Everything is done by creating and destroying blocks.

The game has become a phenomenon thanks to its simple principle and has attracted more than 100 million players.

The creative mode allows you to create anything you want as you want it. While survival demands to survive the zombies that arrive at night.

It is possible to play in split screen mode on console only. The screen is then divided into 2, and each player controls his character on his part of the screen.

It is possible to guide your child in this way.

Up to 4 players can play together locally.

Players can join servers created by other players and enter each player’s world.

On PC, players can easily communicate with each other with voice or keyboard. It is therefore necessary to warn players of the possible risks of these interactions.

PC, Xbox Series, Xbox One and Nintendo Switch players can play together online.

There are microtransactions that are offered to the player, to buy costumes, or different colors of blocks.

Minecraft is a game that leaves the player with the choice of everything, all the time. He can dig non-stop, make tunnels, castles in the sky, huts, houses… it all depends on his imagination. If the child needs guidance and goals to enjoy a game, it is not for him.

On the contrary, if he likes to create, imagine stories without limit of time or resources, he will love it. He can play with his parents or friends on the same console. He can also join his friends online on the Internet. In this case, it is necessary to have increased parental supervision as always when it comes to the Internet.

More information about the game: