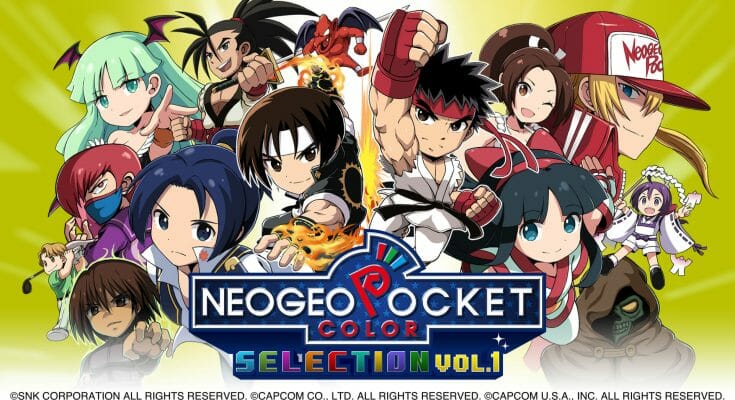 The Neo Geo Pocket Color Selection Volume 1 is a compilation of 10 classic games from the portable console of the same name. These are games developed by SNK around 1999. Six of these games were released individually in previous months. To these are added 4 others, to form the compilation.

There are many games and many difficulty modes for each of them.

The 6 fighting games of the compilation are naturally composed of punches and kicks, and knives, or firearms. Characters can also have special powers of fire, ice, electricity and wind.

The role-playing game (Dark Arms) offers the player to shoot with firearms at monsters.

There is no type of violence in the game of golf.

Everything that is represented is in cartoon format, funny, not at all serious and really harmless.

Just fighting. The selection of characters is very varied. Fighters have all shapes and colors. The characters of all the games are smiling and encouraging.

Many text menus. Needs to be able to read English,…. or Japanese. It was possible to switch between the two languages of origin of the games at the time. There are many errors of English because it was poorly translated at the time. The games are perfectly playable and understandable that said.

There are only 2-3 buttons for each game, and the games are quite slow. It is not difficult to achieve its goals.

The Neo Geo Pocket Selection Volume 1 is a compilation of 10 classic games.

Six of these games have been released separately previously on the Nintendo eShop. You can find detailed information about them here.

The other 4 games are:

Metal Slug 1st Mission: The famous SNK franchise is a platform game where you advance by shooting at everything that moves. Placed under the theme of a whimsical war, the game features soldiers, multiple weapons, multiple tanks, planes, helicopters, but also lasers, extra terrestrials and monsters. This adaptation was remarkable at the time as it managed to be faithful to the games of the original series despite the limited capabilities of the portable console.

Metal Slug 2nd Mission: The rest of the first necessarily. The game is even better and features more than 40 levels, as well as a hundred hostages to deliver, hidden in the levels. It’s really nice to find the game and the vehicles you can run. We feel that the developers tried to put as much as possible in the cartridge at the time, so much content and so it is well done. Unfortunately, the game often slows down even on Nintendo Switch, as there are so many things on the screen, sound effects and graphics for the Neo Geo Pocket Color. You get used to it.

Big Tournament Golf: a very classic game of golf, and very enjoyable to play. Ideal for relaxing. It may be a little difficult to handle at first, as nothing is explained. The graphics are very cute.

Dark Arms Beast Buster: A role-playing game where the player plays a character who kills monsters to recover energy. This energy will then allow him to become stronger and increase the power of his arm as he evolves it.

This compilation allows you to play the games in black and white version, or Color. In Japanese or English. For each game, you can consult the manuals of the time but also the box, and the appearance of the cartridge, by rotating it in 3D.

Each game has a function that allows you to go back in time in case of error or not.

And finally, all titles can be played with 2 players on the same Nintendo Switch console except the 2 Metal Slug.

If you’ve purchased one of the games in this compilation before, be aware that the backup is not compatible with. The entire NeoGeo Pocket Color Selection compilation is considered a unique game on the Nintendo Switch console, and you can just access those titles inside the compilation.

Individual games suddenly become useless when you have the compilation.

A Steam version for PC of this compilation was released on September 29, 2021.

It includes the following games:

Yes there is only one different game between the Switch and Steam version of the compilation.

On Steam, Crush Roller replaces SNK Vs Capcom Match of the Millennium, and the latter is sold separately.

Crush Roller is a not very interesting PacMan clone.

For people who grew up with the Portable Console Neo Geo Pocket Color, inevitably this compilation is unavoidable. There is a lot of content and the games chosen are of very high quality.

For those who discover the video game, or who want to discover a slice of history, they will take great pleasure in seeing it all.

For contemporary players who hope for an experience with beautiful detailed graphics and a way of designing current games, many other games will be more appropriate.