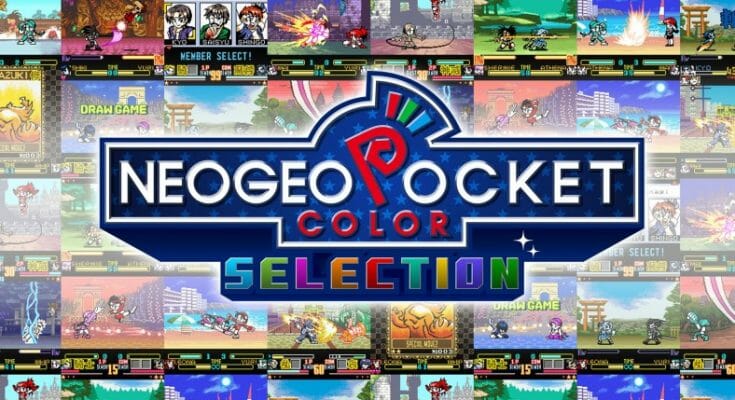 The Neo Geo Pocket Color Selection features the best titles from SNK’s 1998 portable console. Now you can replay these classics and find your favorite characters in miniature on your Nintendo Switch!

The Neo Geo Pocket Color was a portable console released in 1998 by SNK all over the world. It has had very little success despite many quality titles.

SNK being a specialist in combat games, the console has many that are miniature versions of the home console and arcade games of the time.

Recently, SNK is finally releasing the games of this console on the drips on Nintendo Switch with some additional functions like:

In terms of the negatives that are common to each of these games:

Each game is available for 10.77 CAD – taxes on Nintendo’s online store. They are therefore downloadable only and do not exist in cartridge format (except in very limited editions).

To write these articles and videos, the games were provided by the publisher.

Here are the games released so far:

Snk Vs Capcom – Match of the Millennium

Exploiting the license of Snk Vs Capcom games, this fighting game is a cross-over of the 2 giants of the fighting game. You will have the choice between 28 people including 14 for each of the firms. On the program a game full of references and good ideas of all kinds. First of all in the arcade mode (called TOURNEY in the game) you will have the choice to play with 1 , 2 or 3 characters (respectively Single, Tag, you can change persos during the match) and Team. You can also choose between 3 grooves: Average (like Street Fighter but with an energy bar with only 2 levels), Counter (equivalent to Extra in KOF R2) and Rush (equivalent to Advanced in KOF R2).

Then there’s the OLYMPIC mode: Thanks to Rimururu for SNK or Karin for Capcom you can choose between First Blast (the first one who gives the opponent a shot wins), Survival and Time Attack. Then come the mini-games always in this mode that will allow you to play a mini-DDR with Felicia on the themes of Chun-Li, Nakoruru or others, to play a mini-Ghouls and Ghosts with Arthur of course, to slice straw mannequins with Jubei, or to shoot aliens with Marco and Fio. As you play in Olympic mode you’ll get Master Skill points that will allow you to unlock new moves for each of the characters. All the moves are well transcribed from the original game and you will often come back just to make a small game or a Ghouls and Ghosts.

Let’s be clear, MOTM is the most complete and best-crafted fighting game on NGPC. If there were to be only one, it would be this one. The people are very lively, and it’s a pleasure to face Baby Bonnie Hood against Nakoruru.

Always a pleasure to find an extra game on Nintendo Switch. However this one is one of the first of the Neo Geo Pocket Color console, and the handling is not really nice. In addition, the content is really very poor. Unless you’re a big fan of the characters, you can focus on the other titles of the “Selection”.

Taking some of the characters from the Fatal Fury series, First Contact is a combat game that is not unlike any other. Unfortunately, it only benefits from one mode i.e. Arcade and a realization a little below the others. It was quickly overshadowed by King of Fighters R-2 for obvious reasons. Indeed the latter is better in every way, whether in the characters, animation, game modes. The only interest to get this game would be for the collection.

Last Blade: Beyond the Destiny

Last Blade: Beyond the Destiny is a mix between Last Blade 1 and 2. In the game we find the stories of the 2 previous episodes. Once we complete the story of Last Blade 1, we unlock the story of the 2.

This stabbing game features a dozen playable characters. We are delighted to find the SD versions of the characters we knew on Neo Geo and MVS. So are present in this game: Kaede, Lee, Akari, Yuki, Moriya, Okina, Amano, Washizuka , Zantetsu and 5 characters to unlock that I leave you to discover.

The animation is slower than in the rest of the console’s fighting games. Some moves are difficult to execute on Nintendo Switch but the gameplay remains good.

After passing the pretty animated intro telling the story of the game and presenting the characters, you will be entitled to the following modes: History, Survival, Time Trial and Training. The game features a gallery of images and two mini-games: “Great Escape” and a “Home Run Competition” baseball mini-game to unlock.

For your fight, you will have the usual choice between Power and Speed, to base your style on one of these two characteristics: either powerful moves or combos. Each level is presented by a mini intro, well made and allowing you to admire the graphics. In fact, some of these courses are lively during combat.

During Story Mode, you’ll get a few text provocations before the fight. As you fight, you’ll get points to unlock images and fill your gallery.

In conclusion, Last Blade: Beyond the Destiny is a complete and very enjoyable game.

Official page of the game King of Fighters R-2

For more details about this game, please see the review available here,or in the video below.

If you want to choose only one or two, here is my ranking, from best to worst: