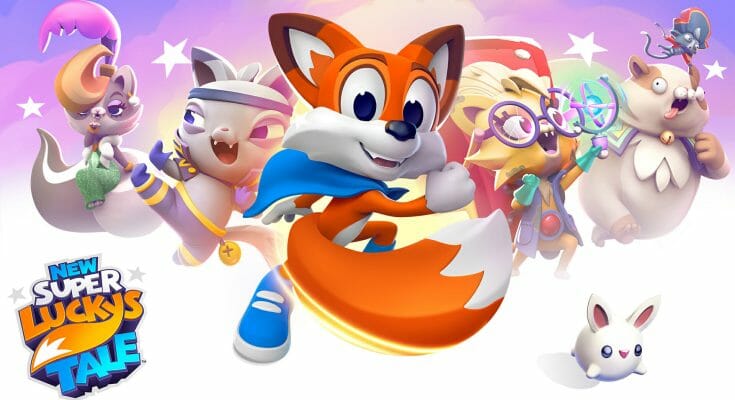 New Super Lucky’s Tale is a 3D platform game where you play as a mascot resembling an anthropomorphic fox. The fox, called Lucky Swiftail, embarks on a quest to help his sister Lyra, a member of the Order of Guardians, protect the Book of Ages, within which entire worlds and characters exist.

Business model: Just need to buy the game once.
Languages available: French and English in particular
Number of players:
1 player on the premises

Not very difficult, ideal for beginners.

To defeat the enemies, it is enough to jump on them or give them a tail blow, then they disappear with smoke and sparks.

The game is well suited for children. However some jokes are rather referenced in popular culture for adults.

Encourages you to respect your environment, explore, go on an adventure and save your family.

Requires reading for years. Dubbing the title is not enough.

You have to learn to jump on the platforms and gauge these jumps to land in the right place.

New Super Lucky’s Tale offers players the opportunity to play as the fox Lucky. This one will move in a 3D world, jump on platforms and enemies and recover objects. It will also travel through many environments. The universe is colorful is enchanting and similar to what we see in cartoons.

When I tried the game, I said to myself, I have to talk about it on the site! The game is perfectly suitable for children but also for adults. It is very pleasant to play and there is no need to move the camera often. The vast majority of the time it is placed in the right place.

The game is a little bit long and stretched in length for my taste.

Despite this, New Super Lucky’s Tale is a safe bet, and should be able to be found at a low price from now on.