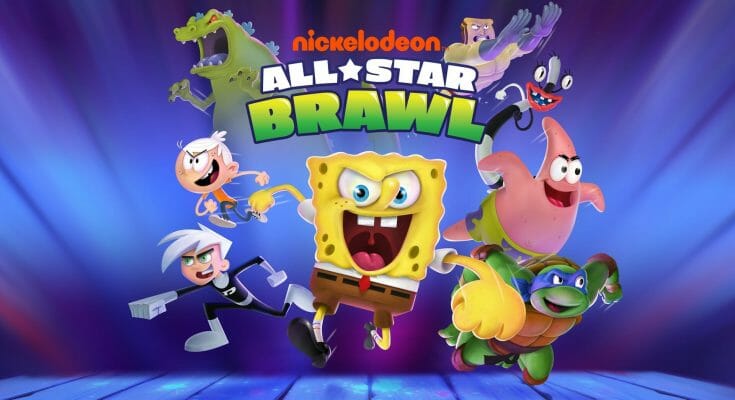 Nickelodeon All-Star Brawl offers you to choose a Nickelodeon character and face between 1 and 3 opponents in a platformed fighting game. One can choose between characters and sets from the following Nickelodeon cartoons: Aaahh!!! Real Monster, Avatar: The Last Airbender, Hey Arnold, Danny Phantom, Legend of Korra, Rugrats, Teenage Mutant Ninja Turtles, SpongeBob SquarePants, and many more…

Characters can give 3 different types of blows in each of the cardinal directions, jump and dodge attacks. Many game modes are available to vary the fun.

Business model: Need to buy the game only once. Then characters and costumes are available separately

Many difficulty modes will be available, but the fiercest opponents will be humans.

It takes a minimum of coordination at the controller to accomplish the actions, but nothing complicated.

Requires knowing how to read to understand the objectives and menus but nothing complicated. We can get away with it.

Encourages competition between players. It is also possible to play cooperatively and as a team against an opposing team.

Additional characters are available for purchase separately on the digital stores of consoles or computers.

Battle: Allows you to choose the rules of the game and launch matches as you wish.

Arcade: A mode offering a succession of matches against the computer

Requires a Playstation Plus, Nintendo Switch Online, or Xbox Live Gold membership to play online on console. No subscription required on computer.

Unless you have friends who own the game, it will not be possible to play online for very long, since all players and buyers have deserted the game.

Too bad because the developers had taken care of the quality of the computer code to play online.

It is possible to play matches with or without ranking in 1 vs 1, play with objects, or play in lobbies against 1, 2 or 3 players.

This is a very low budget copy of Super Smash Bros Ultimate . Unfortunately the game is not up to the cartoons it represents. It lacks a lot of content. The combat phases are not pleasant, the impacts are not felt, the characters repeat the same phrases all the time during the fights (since an update added this function) and are annoying.

We chose to talk about this game to warn you, because the licenses present may convince you.

A game to avoid, or to buy at a very low price if your child is an undisputed fan of one of the characters present in the game.

If you play on Nintendo Switch, Super Smash Bros Ultimate is the best game of its kind unquestionably. Online modes slow down a lot.

If you play on PC, Playstation or Xbox, Multiversus is the best alternative to Super Smash Bros Ultimate, and the online gaming modes are very good.