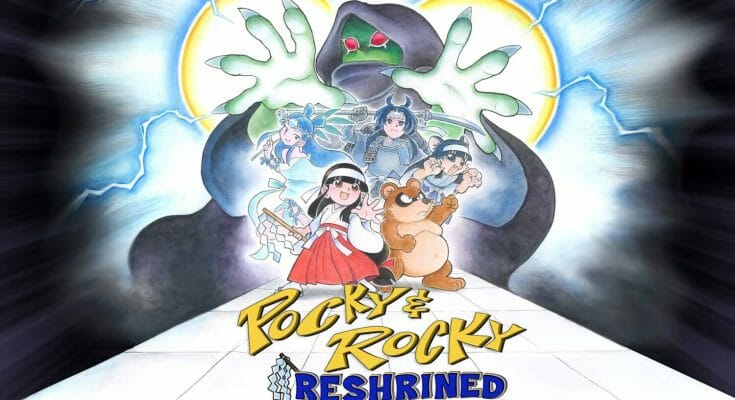 Play as the girl from the Pocky Shrine or her raccoon companion Rocky and defeat hordes of enemies with your magical shots. Pocky & Rocky Reshrined offers you to explore levels based on mythology and the Japanese bestiary.

Very high. No difficulty choices. It is necessary to try, lose, try, lose and learn by heart the movements and appearances of enemies.

The characters are monsters in cartoon, manga format. They pull the grimace, show their teeth but that’s all. When they are defeated, they turn into a room.

Encourages to persevere, to concentrate.

It is not difficult to perform, but it will take good coordination, reflexes and memory to pass the tests.

You go through the levels filled with Japanese monsters and temples. You shoot at everything that moves, or try to avoid them, and you get to the end of the level where you will have to defeat a boss.

At your disposal, 4 actions:

The principle of the game is really based on trial and error. As soon as you arrive in the game will many enemies will move in the direction of your character. No tutorial exists, you have to learn the basics and subtleties of the game hard.

By dint of trying, you will arrive further and further, and eventually unlock new characters, a cooperative mode playable with 2 players locally only, and new skills.

Only a story mode that you have to go through many times to unlock helpers.

8 levels full of danger await you.

The “Free” mode allows you to play 2 players but you have to complete the story mode or collect 10,000 coins on enemies in order to unlock it. You can get about 100 to 500 coins per try.

It takes 3000 coins to unlock a very easy mode, which is totally counterintuitive.

Stuttgart, Germany-based publisher ININ Games will publish physical editions of the game. Some limited editions have plush toys and other gadgets inside.

The game is pretty, the art direction is neat, but … it is very difficult and frustrating. It’s definitely not a walk in the park, and I don’t like the fact that you have to struggle for several hours before unlocking the co-op mode. The enemies are always ready to ambush you, you also have to learn the levels by heart.

Unfortunately, only the most persevering players will be able to find pleasure in this game.