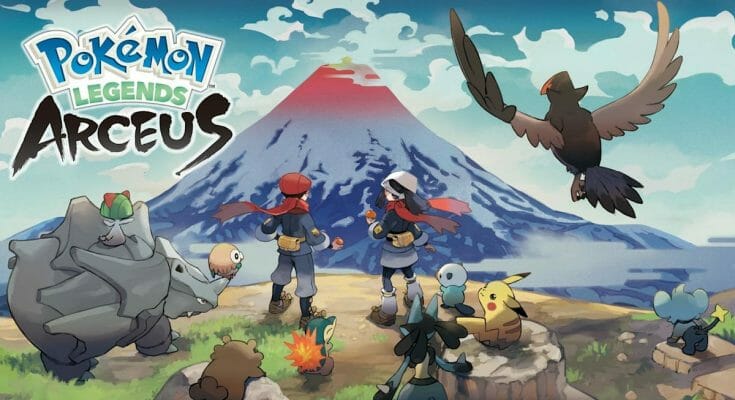 Discover the Hisui region in this new installment of the Pokémon series (Pokémon= Pocket Monsters), which takes place long before Pokémon Brilliant Diamond and Pokémon Shining Pearl. You will also have to solve the mystery behind the Pokémon named Arceus.

The main story is about twenty hours. Fifty additional hours will be required if the player wishes to complete all the mini quests. On the other hand, once the main story and mini quests are completed, the player has the option to continue to catch and fight Pokémon without a specific objective, or to start a game from scratch.

The beginning of the game is easy, but it will take perseverance to get to the end of the adventure. The game holds you by the hand, it shows you each of the mechanics one after the other. The game gradually becomes more and more difficult.

Pokémon compete in many battles. No blood. When monsters lose, they are knocked out and can always be cared for. Attacks of fire, ice, electricity… are used. Pokémon will also try to attack you, the player. You can’t die, but you faint and lose some of your gear if a wild Pokémon manages to reduce your life to zero.

Developped enough. Suitable for children from the end of primary school, or secondary or more. There are many texts to read to understand the story.

The game conveys a message of friendship and mutual aid between Pokémon and humans. However, the focus is more on capturing Pokémon and fighting.

Must have a few years of reading experience. The game requires completing quests that consist of conditions to be fulfilled. These conditions are explained in one or two short sentences. The quest menu can be quite full, which makes a lot of text to read.

Almost all buttons on the controller are used. Ability to enable and disable motion capture with the controller. The game requires good reflexes. The controls require a certain adaptation before mastering them.

It is a role-playing game (RPG) in which players capture Pokémon so that they fight against other Pokémon. The focus is on completing the Pokédex, a catalog that contains a wealth of information on all The Pokémon in the region.

To compete with the Pokédex, you will have to catch all the Pokémon in the Hisui region. This region is separated into several zones. The player begins his adventure in Jubilife Village. This village is the base camp of the Galaxy Team , the group for which the player works. Exploration is done zone by zone: to go from one zone to another, the player must first go through Rusti-Cité.

This game gives a certain breath of fresh air to the series. Indeed, the regulars of the series will be surprised to see these new mechanics:

Battles are fought directly in the environment in which the player is located;

Some items cannot be purchased, they must be created using crafting mechanics;

Pokémons can attack the player directly, and he must defend himself with one of his Pokémon from his team;

The player will find Pokémon named Alpha Pokémons, which are more powerful than regular Pokémons.

The Pokémon adventure in which the player embarks.

It is possible for two people each with a console and their copy of the game to exchange Pokémon with each other as long as they are close to each other. This mode is available by talking to a character in Jubilife Village. Exchanges are only possible after about 1 hour of play.

It is possible for two people each with a console and their copy of the game to exchange Pokémon with each other via the Internet. To do this, a Nintendo Switch Online subscription is required. Exchanges are available only after about 1 hour of play. It will be necessary to talk to the same character of Jubilife Village.

For an exchange to be possible, a first player will create a code that the second player will enter in his console. It is through this code that Pokémon exchanges are made. It is therefore possible to make exchanges with strangers on the Internet by sharing this code on social networks. On the other hand, the game does not put in communication the 2 players, they can only proceed to the exchange.

When a player loses his entire life, he “faints”, and loses some of his equipment (a few objects). Another player can find their equipment, in their own game, and send it back to the original player. This mechanic requires a Nintendo Switch Online subscription. It should be noted that this mechanic is not essential at all in order to enjoy the game.

Pokémon Legends: Arceus offers a Pokémon adventure that brings some changes to the Pokémon formula we’re used to. These changes are very welcome. However, we have a few points to raise: the graphics may not be appreciated by all, the beginning of the adventure is quite slow (it takes about 1 hour before you can officially start the main story), and the capture of Pokémon becomes quite repetitive in the long run.

That said, we believe the game offers several hours of fun that will satisfy players who were looking forward to experiencing a Pokémon experience different from what is currently available.

Pokémon Sword or Pokémon Shield offer a certain complexity in combat, especially with the new mechanic called Dynamax, which consists of growing your Pokémon so that they reach a gigantic size. This game also offers a big region to explore.