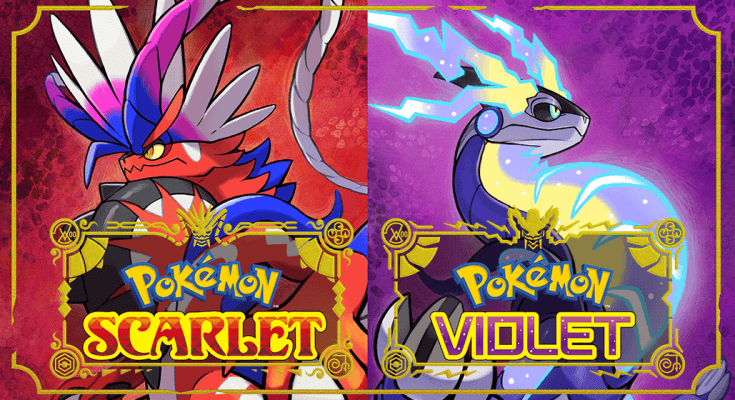 Pokémon Scarlet and Pokémon Violet are the first Pokémon games that are set in an open world. Discover the new Paldea region to capture the new Pokémon therein and defeat the Pokémon Trainers who get in your way.

The beginning of the game is easy, but it will take perseverance to get to the end of the adventure. The difficulty of the game gradually increases. The open world allows you to quickly reach places that would normally be reached at the end of the game, so if the player advances too fast, he may come across Pokémon and opponents much more powerful than him.

Developped enough. Suitable for children from the end of primary school, and more.

Ability to choose the skin color of the playable character. The non-player characters (NPCs) important to the story are all very beautiful and thin, so no real variety in their appearance.

None announced so far, however the developer often has the habit of creating additional downloadable content for his games.

There are not many buttons to use, however, the 3D camera can be complex to handle for people who are not used to navigating a 3D environment. In addition, the game requires some coordination when traveling on the back of Miraidon/Koraidon.

⚠️Attention Pokémon Scarlet and Pokémon Violet are the same games. The differences between the two versions are few. Only one copy of the game is required. ⚠️

It is possible that advertisements on the internet mention that in order to have the “complete experience of the game”, it is necessary to buy both games. The two games are interchangeable. Only one game is required.

Indeed, there is a Double-Pack that contains the 2 versions of the game. This pack is not a discount compared to the purchase of the two versions separately.

It is a role-playing game in which players assume the role of a Pokémon trainer who wants to become the champion. To achieve this, he must capture the best Pokémon and make them win battles. Players explore the fictional region of Paldea, which is entirely open-world, that is, the entire map is available from the beginning of the adventure. At some point in the game, the player will unlock the Pokémon Koraidon (in the Scarlet version) or Miraidon (in the Purple version), which takes the form of a motorcycle that allows you to climb walls, swim on the surface of the water, and hover in the sky.

Here are the main mechanics of the game:

As for the fights, they are provoked by wild Pokémon that roam the world freely or by non-player characters.

When a player fights a wild Pokémon, they may decide to attempt to capture it with a Pokéball. The weaker the wild Pokémon, the higher the chance of capturing it. From place to place, the Pokémon to capture differ. However, the player will quickly realize that there are patterns : some Pokémon are found only on the water, in the mountains, in the forest, etc.

In the open world, by pressing the “L” button, it is possible to make our Pokémon fight automatically against other wild Pokémon without having to enter a battle.

Teracrystallization is a new battle mechanic in the game that allows a Pokémon to change its type. Indeed, each Pokémon has a type, which gives it strengths and weaknesses against other types, like rock-paper-scissors. There are several types: Fire-type, water type, grass-type, electricity type Pokémon, etc. For example, by teracrystallizing his fire-type Pokémon, he could suddenly become a water-type Pokémon. This change of type therefore adds a challenge in terms of the strategies used to defeat his opponents.

The region of Paldea is a large open world that the player can explore at will. It will take about 15 minutes to play before you have access to the open world. The further the character moves away from the starting point of the game, the more powerful Pokémon and Pokémon trainers are. So, if the player goes too far too quickly, he will face opponents much more powerful than him.

Wild Pokémon roam freely in the open world. When the player touches a Pokémon, a battle sequence begins. Some Pokémon will run towards the player to attack him, some will flee him, and some will be indifferent to his presence.

Pokémon games are usually linear, that is, the player must follow steps dictated by the game if the player wants to complete the game. However, Scarlet and Violet allow the player to advance the story as he pleases in the order he wishes. In short, there are three main quests that all contain sub-objectives that the player completes in the order of his choice.

Advancement through these three quests allows you to develop the story and learn more about the characters and the Paldea region.

It is possible to play the entire game with 3 other friends who are in the same room (maximum 4 players in total). You need one console per person, and one copy of the game per person, regardless of the version. Here’s what you can do in local multiplayer:

It is possible to play the entire game with 3 other friends online (maximum 4 players in total). You need one console per person, and one copy of the game per person, regardless of the version. Here’s what you can do in online multiplayer:

It is possible to play online with friends, or with strangers. The game does not allow communication between players, so do not be afraid that your child speaks to strangers through the game.

Pokémon Scarlet and Pokémon Violet are games that are very polarizing across players. Indeed, the game has its strengths, but also its weaknesses that are very difficult to ignore.

Multiplayer play is just as fun. Players have every interest in playing the game with their friends, which further extends the life of the game.

There are a lot of slowdowns. Slowdowns in the open world, during battles, during cutscenes, etc. When you open a menu, you have to wait 2 or 3 seconds before you can do an action. There are very few times when there is no slowdown. For some, these slowdowns will give a good headache by dint of playing them. Several have experienced crashes: the game that closes unexpectedly. Fortunately there are automatic backups, these avoid losing too much progress.

Do I buy the game?

In short, it looks like these games are still at a rough stage, as if they weren’t finished. For some people, the positives are enough to justify buying one of the two versions. On the other hand, some regretted having bought The game, and hope that an update will fix the game’s performance issues. Nintendo has not made any announcements regarding a potential bug fix at this time.

If the performance and graphics of the game don’t matter to you, go ahead, buy it, you will definitely have fun. On the other hand, if these elements bother you, perhaps wait for a future update before buying it.