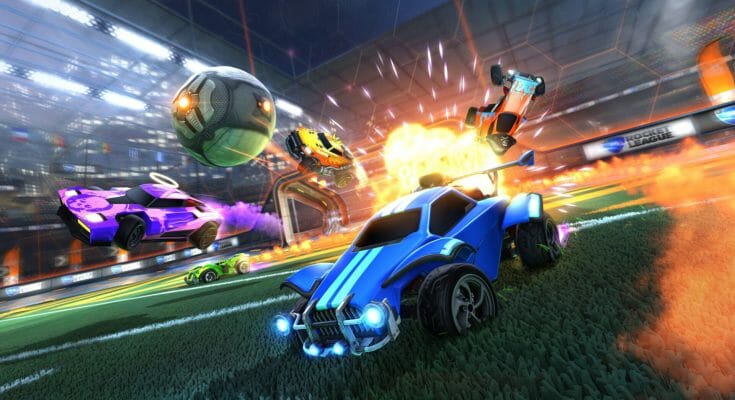 Control a remote-controlled car in a football/soccer stadium and score goals by pushing the giant ball towards them. In Rocket League, 2-4 teams face gravity and their opponents to score as many goals as possible and win the game.

The difficulty lies in the other human opponents who know the game by heart. It has been around since 2015, and it’s one of the most popular titles in the world so there are all levels of players.

It depends on the players online, the vast majority of players do not talk or chat during matches.

Some of the songs in the game contain references to alcohol or tobacco.

It is possible to teach teamwork through this game, as long as you are well supervised and surrounded. Toxic players may be encountered in the online community, but the games are so fast that most of the time no one argues.

Some menus with pictures. The infant can learn them by heart.

Many optional cosmetic items are available for purchase in the game’s virtual store. When you play socially in community, you always want a car different from the others, more original, more innovative, so some players do not hesitate to pay to get the accessory or banner of their choice. The game has 2 virtual currencies.

The game has a “Rocket Pass” that has the same operation as the Battle Pass of Fortnite. The operation of monetization is very similar to that of Fortnite. More details in the article “Fortnite’s Strategies to Make You Spend”.

The game is enjoyable to play with the controller, even for beginners. However professional players have a unique mastery of the vehicle and the game does not explain how to get to this point.

Two teams of remote-controlled cars push a ball into the opponent’s goal. It’s as simple as that.

All game modes can be played from 1 player to 4 players (except on Nintendo Switch, only one player).

Custom modes: Create or join a custom game by players.

You can play online for free on all consoles and computers. You don’t need a subscription.

It is possible to play partly with ranking or without ranking. Play part private, or in rooms to host and chat with several opponents/players.

Note that all players of each console and computer can play with players from other consoles, computers.

The same game modes are available online or offline.

Rocket League is a great game for everyone, regardless of age. The concept is very simple and therefore very effective. There are a lot of players on this title. The only problem is the monetization of the title. It will be necessary to ensure that the child does not spend too much in the virtual store on accessories and cosmetics for his car in the game.